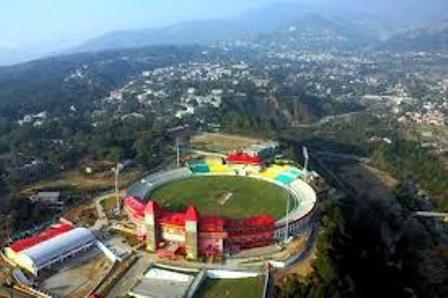 Dharamsala: Counted among the most scenic cricket grounds in the world, Board of Control For Cricket In India (BCCI) in its fixture release has announced holding of a One Day International (ODI) match in the India – West Indies series coming up later in the year.

Set against the majestic Dhauladhar Ranges, the stadium will be holding its second ODI, the first being a match between India and England held on 27 January, 2013.

“Hosting another ODI  in a short span is a big achievement for us,” said Sood.

Other ODIs of the series are scheduled to be played at Kolkata, Vishakhapatnam, Cuttack and Kochi. Besides the two teams are to play three test matches at Bengaluru, Hyderabad and Ahmedabad and one T20 International March at Delhi.