On June 16, it will be a year since Uttarakhand experienced its worst natural disaster. It was also a year of loss, of grief, of recovery and of resilience.

While those affected continue to cope and rise, we need to look beyond the disaster in order to unravel the contradictions and challenges that surround it.

Along with tragedy, disasters also bring to us an opportunity to pause and reflect and it shall be even more tragic if we let that opportunity pass us by.

Evoked as Dev Bhoomi, Hindu pilgrims have travelled to the state since the 9 century AD. The phenomenon of pilgrim-tourism to the Chardham however has a more recent history.

The accessibility by road and the convenience of the taxi now on offer have reshaped the local economy around the commercial activity that pilgrim-tourism generates.

While the televised theatrics of rescue operations last year compelled people into condemning misplaced concerns for development, the plight of the resident-affected population did not receive adequate attention.

Disasters are not single-day events in the calendar of Uttarakhand; they constitute everyday experiences in the life of those who engage with natural resources most intimately. 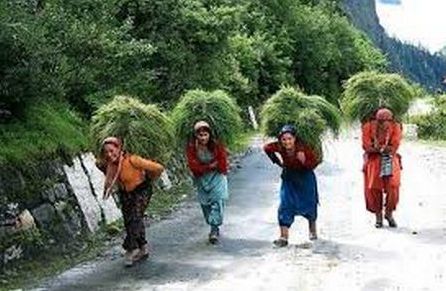 Lack of fodder for cattle, of water for irrigation, intrusion of wild animals into farms, deteriorating quality of the commons, soil erosion, landslides, lake bursts — these may not spell disaster for the pilgrim and the tourist but certainly diminish the capacity to carry on sustaining life and people.

Though ecologically fragile, the state is otherwise replete with resilient paradoxes. It has one of the higher literacy rates in the country at 79.6 percent; the retention rate in primary schools is nearly 93 percent.

Unemployment levels are however staggering, especially in rural areas at 11 per cent (third highest in the country) with women lagging behind by almost double.

For a region that is the source of a majority of water systems in the country, water scarcity is one of the most acute realities of towns as well as villages where the traditional natural resource of water has mostly dried up.

For a state that is the first in the country to declare itself organic, the organically most resilient varieties of crops and vegetation are being increasingly displaced in village communities that choose to rely on the cash income of the migrant and daily wage labour to augment household production.

The mountains have forests but the mountains have markets too. Roads have become a rallying point of demand to facilitate movement within the region, which has enabled the entry of the ‘bazaar’ in its new liberal avatar.

The reality of migration, concomitant with that of urbanisation, is an enduring one. Sporadic urbanisation has led to schizophrenia of small town clusters, which have created a challenge for eco-system service delivery and management.

Corresponding infrastructure is not only falling behind, it is near dysfunctional especially on matters of waste management, provision of water and cooking gas.

Industrial activity in the region did not take off as expected. Due to inadequate infrastructural facilities, poor management, disrupted linkage between production and the market — the state has witnessed entrepreneurial disasters in its not so long ago past — Hindustan Machine Tools in Ranibagh, spinning mills in Kashipur and Jaspur, magnesite factories in Almora and Pithoragarh, small-scale or cottage industries also have been unable to stand up as an alternative.

Other than the terai areas of Dehradun, Haridwar and Udham Singh Nagar, the hill districts continue to struggle in the face of an imbalance between ecological fragility, appropriate human resources and the lack of a vision for industrial activity.

For a population that is almost 70 per cent rural, villages and their unique situation must not be ignored.

Agriculture in the state is mostly for subsistence; as a life choice, there is increasing disenchantment particularly due to diminishing returns from land exacerbated by wildlife attacks on standing crops and livestock.

For a region with limited possibilities of large-scale irrigation and mechanisation due to its terrain, agriculture is mostly rain-fed and driven by family labour, hence the uncertainty of the weather makes it more painstaking.

Village life, particularly in those villages, which are not too far off from the road and where the taxi and the bazaar have made an unencumbered entry, is also beginning to reshape itself, gradually but certainly.

A marked generational shift away from land-based activities holds critical indications for the economic planners in the region. For a region characterised by significant migration of young men, this should not come as a surprise.

However, without hyphenating the morality of whether pahaar ka paani aur pahaar ki jawaani (the water and the youth of the mountains) should stay home, it is important to examine how such a demographic shift will play out in the horizon of the next decade in terms of workforce participation, especially in agriculture.

Simultaneously, the geriatric characteristic of the resident population and its needs must also be addressed.

It is also significant to note that the stereotype of the laborious ‘mountain women’ on whose back rural mountainous communities have sustained themselves too is beginning to chip.

As women in the region continue to confront alcoholism, the drudgery of labour and limited access to the use of natural resources, a grim demographic picture confronts us.

According to the 2011 census, the child sex ratio has dipped to its lowest ever of 886, something which requires immediate attention by the government and society.

Contesting matters of implementation and monitoring the Indian Wildlife (Protection) Act apropos the human-wildlife conflict, that of the Forest (Conservation) Act in view of the displacement of forest dwellers, judicial intervention in the ban on the grant of environmental clearance to 24 hydro electricity projects, rebuilding the physical and social infrastructure after last year’s disaster and managing unemployment are the foremost problems that continue to blight the state.

For a fledgling state, which is 13 years old but has had eight chief ministers in command, the political landscape is fraught with challenges to governance.

For the duration of its presence within UP, the region attracted attention only during its moments of crises — as a frontier area during the Indo-China war, for environmental policy planning in the aftermath of the Chipko movement and most recently due to the demand for separate statehood.

It was expected that the formation of a new state would claim ‘development’ for itself.

Even as the expectation remains unfulfilled, only a sense of hope and renewed purpose among its people and creative innovations and decentralisation in governance can chart a more enabling destiny for Uttarakhand.

This article has also appeared in The Hindu