The book is about a Punjabi boy who falls in love with a Tamilian girl. How they battle opposition from their families, and persuade them to let the two marry

2 States has been one of the most eagerly awaited movies of recent times.  It is based on a bestselling book by Chetan Bhagat of the same name.  As we know, Chetan Bhagat is a big favorite of most young people ever since he came out with his debut winner ‘5 Point Someone’.

The book is about a Punjabi boy who falls in love with a Tamilian girl.  How they battle opposition from their families, and persuade them to let the two marry, is what the book is all about.

The movie is a faithful rendition of the book.  Krish (Arjun Kapoor) meets Ananya (Alia Bhatt) at the food queue in the canteen in IIM, Ahmedabad.  She is disgusted by the odd tasting sambar. 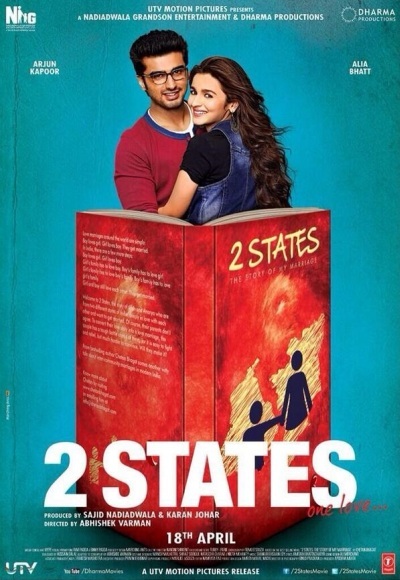 Krish consoles her and tells her she will soon get used to the mess food.  Later, Ananya is lambasted by the Economics Professor who seems to have taken an instant dislike to her. Krish promises to coach her in the subject to help her get back in favor with the Professor.

They get close, become friends and soon fall in love.  Before they know it, it is time to graduate and leave.  Krish realises that if he still wants to be with Ananya he has to pop the big question. Krish and Ananya assume their parents will be as happy with this decision as they are.

They are surprised to discover that their parents do not get along at all, and are opposed to the idea of their marriage. Dismayed by this, they plan to spend some time and win the parents over.

The plot seems promising enough for a romantic comedy.  And it does work in many ways. Arjun Kapoor and Alia Bhatt are a mint-fresh couple.  They look good together and, as is often said, they do have chemistry.

Of the two sets of parents, Amrita Singh, as the boy’s mother, stands out.  She is the typical lively Punjabi mother who finds it hard to accept that her darling boy has chosen a girl from ‘Madraas’.  The Punjabi father, Ronit Roy,  comes up with a credible performance too.

The girl’s parents, Revathy and Shiv Kumar Subramaniam, are adequate although I could not help feeling their roles were not meaty enough for them to do justice to their abilities.

This is the oddest thing about the movie. The big part of the story is that Krish and Ananya have to work hard to make their parents see their point of view, but it is precisely these scenes with the parents that are quite lacklustre.

In fact, I would even say that the entire “parent manao” drill got so heavy that even the sweet romance between the young lovers suffers as a result.

Despite all these weaknesses that a lot of others have also remarked about, the film is doing well.  It is grossing money hand over fist.

There is no other movie in the listings yet to give it competition and there is enough in the movie to keep young people flocking to it.  Clearly, Chetan Bhagat’s luck with his books has rubbed off on the movie as well.

Ava Suri, a journalist with long experience, has exceptional skills about content & feature writing with a critical eye for detail and accuracy