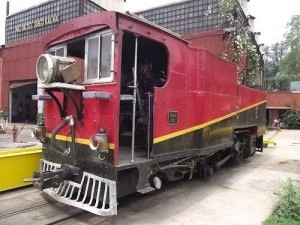 A few weeks ago an old dragon was woken up in Shimla for a group of foreign tourists who wanted to ride it and enjoy the smoke rising through the tall pine trees.

Well not literally, but the 109 year old steam engine from the British era that took on the narrow gauge track between Shimla and Kathlighat, could very well be compared to a dragon.

KC 520 is a coal driven steam engine that started operation in 1905.

It used to ferry British officers and their wives and/or mistresses between Kalka and Shimla. From 1952 onwards steam engines were slowly replaced by the diesel engine and KC 520 retired into obscurity. It was recently restored in Amritsar and now operates as a tourist attraction.

I say rich because the cost of booking this old behemoth is Rs.80,000 plus 20% service tax. Frank, an American tourist booked the engine and a couple of coaches for his friends to enjoy the 22km journey in just over an hour.

The Indian Railway Catering and Tourism Corporation (IRCTC) says that up to 40 people can be accommodated on such a chartered ride. Food is provided during this magical ride that is redolent of the charm of the early years of Shimla town.

Sadly only someone who has around 1 lakh rupees to spare can enjoy this ride.

They might even find it hard to understand how someone can pay so much for such a short ride. They might dismiss this as a foolish quirk of the extremely rich. But the truth is that there is something to be had in having such an experience in today’s world where everyone is busy running around.

To sit back and enjoy a slow decent on a train from another world would be a nice break from the usual routine where we are used to fast food and multitasking. For now only the rich can afford it and we can only read about it and maybe perhaps dream about the dragon of the mountains.