Apparently Harish Rawat, chief minister of Uttarakhand is a man no hurry about distributing portfolios to his cabinet ministers, who have been craving for departments even after a month they were sworn in.

Dehra Dun : Uttarakhand chief minister Harish Rawat seems to be a man in a hurry, which is obvious from the number of mass foundation stone laying ceremonies undertaken by him and the promises that are doled out to the people on the slightest pretext. It is another issue that most of the promises may never become a reality.

But apparently one place he is in no hurry is in distributing portfolios to his cabinet ministers, who have been craving for departments even after a month they were sworn in. 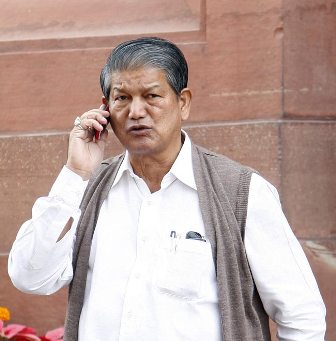 Though Rawat retained all the cabinet ministers of his predecessor Vijay Bahuguna to ensure that there is no heart burning, but the issue of distributing portfolios to them has been hanging fire ever since the day of swearing.

Though the chief minister has time and again reiterated that there is no hurry in allocating portfolios to the ministers as he has already distributed works to them, but the ministers feel that they are redundant in the absence of any departments to look after.

Time and again there have been reports that Rawat will allocate the portfolios after discussions with the party high command but that too has not transpired, despite the number of visits that he has made to Delhi.

It is well known that while some of the ministers were not happy with the departments given to them during the tenure of Vijay Bahuguna and are looking forward to the departments of their choice under Rawat.

Besides, the Congress high command has also not been happy with the working of some of the ministers holding key portfolios and want that they be given other portfolios.

However, political pundits here feel that the chief minister will have to do a tight rope walk in the issue of allocating portfolios as there could be many disgruntled ministers.

As it is the Congress government is at the mercy of the BSP and independent MLAs, who could pull the rug should they not be given the ministries of their choice, making it that much more difficult for Rawat.

Tthough the opposition BJP did move a no-confidence motion against the government in the hope that the disgruntled BSP and independent MLAs who have yet to be allotted the portfolios may vote against the state government, but that was not to be and the motion dropped. This has only emboldened the chief minister.