Dehra Dun : The doors of the revered Kedarnath shrine are to open for the public on May 4 and with it stakeholders in the Chaar Dhaam Yatra, a backbone of the economy for the upper reaches of Garhwal division of Uttarakhand, are hopeful that perhaps the state government will intervene and give them their due to set up the required infrastructure, which is a must for pilgrims.

There is just over two months for the Kedarnath shrine to open, but stakeholders who have been involved in the yatra in the past, claim that the time is too short for the state government as well as private parties to put up the requisite infrastructure to cater to the pilgrims. 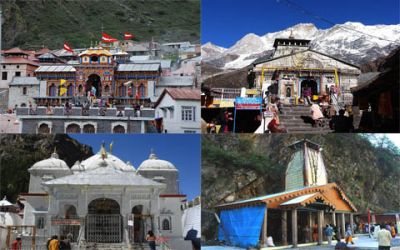 There are questions on whether the trek route from Gaurikund to Kedarnath shrine will be ready by that time, despite assurances by Uttarakhand chief minister Harish Rawat.

It may be recalled that the Kedranath Vally, including the temple township was devastated by the June 16-17 deluge that is now termed as the ‘Himalayan tsunami’ and though much of the temple premises buildings were destroyed the temple in itself, though partially damaged, was saved by a rock that prevented the onslaught of the flood waters from destroying the sanctum sanctorum and the main temple building.

It is not only the trek route from Gauri Kund to Kedarnath that has to be restored in these two months, but even the Kedarnath highway is in a bad shape and even die hard optimistic feel that the government with all its good intentions and man and money power may not be able to rise to the occasion, despite the confidence of the chief minister. There is colossal work to be done, they confided.

To press home their point they said that the inclement weather over the past few days with snow in the higher reaches has made the task that much more difficult for the Border Road Organisation and other agencies involved in building the roads and the trekking route. Work on the higher reaches can only start after the snow melts which may take time because of the prevailing cold conditions.

They further contended that even the condition of the Kedarnath highway, which took a very bad beating in the June 16-17 floods is in a bad shape from Rudraprayag itself, adding that at may places the road had to be remade on the river bank itself. The road has yet to be opened from Rudraprayag to Gauri Kund, from where the trekking route starts.

Added to this is the problem of where the large number of pilgrims who come for the yatra will stay enroute as most of the guest houses and small hotels that lay along the yatra route have been washed away, along with the dhabas that catered to the pilgrims. Most of the owners have yet to build their hotels as their entire savings have gone with their establishments.

However, an official said that the state government is committed to putting the yatra back on track and it would be ensured that not only the Kedarnath highway from Rudraprayag to Gauri Kund is restored well in time but the trekking route is also ready from Gauri Kund to Kedarnath, despite the inclement weather and other problems.

He said that the state government is giving 80 per cent grant to the businessmen who had their establishments along the yatra route, so that they can put up their hotels, restaurants, guest houses and dhabas to cater to the pilgrims. “we have to understand the importance of the yatra in the context of the economy of the region and as such the need to ensure that all bottlenecks are removed”, he added.

Meanwhile, the stakeholders felt that the yatra was getting a lukewarm response from pilgrims this year, as the image of the state government had taken a severe beating because of the manner in which the relief and rescue operations were handled. The negative impact has fallen directly on the yatra and pilgrims are shying from coming, lest a similar tragedy strike the region yet again, they claimed.

They said that normally tour operators from various state book their hotel accommodation and start sending enquiries from December itself for the yatra, but this year neither were there any enquiries, nor were there any bookings.