As Indian Blind Cricket is preparing for the upcoming world cup after they have won its first T20 World Cup defeating Pakistan in 2012, Mahender Vaishnav, a board member of the Andhra Pradesh Blind Cricket Association, also, once a vice captain of the Blind Cricket Indian team helps us understand what Blind Cricket is all about and how their journey has been. 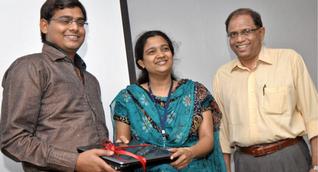 Q: India won its first T20 World Cup in 2012. Do you think it has increased opportunities for more people to take up blind cricket seriously?

Indian team has been performing remarkably well. We reached twice into the finals in the world cups. It has also got the credit into its bucket, winning the first ever T20 worldcup defeating Pakistan in 2012. Now India is the world champion. Despite all of these it’s neither supported nor encouraged by the GOI nor BCCI.

Q: As a batsman or a bowler, is there a specific way a blind player

practices and do they do a lot of specialized training to improve their
performance on the ground. If so what?

It’s a similar approach for training and coaching for normal and special cricket.

It’s a same game, ground, format except some additional rules. It’s just that in this game they need to have more concentration, listening skills , gazing power and timing. This game is entirely depends on sound and noise.

The basic difference is Ball and Bowling pattern.This form of cricket is based on sound. The ball is made of synthetic fiber and put in with small iron balls in it to make sound. The bowling pattern is under arm, the ball roles on the pitch. The batsman by listening to the sound hits for shots.

The eleven members team is divided into three categories:

B1- of four players who are totally blind

So this game is entirely depends on coordination and noise.

The coach and umpire are normal people

So, only the B1 category players are totally blind and the rest could have partial vision and can see the ball from close distance.

I belong to B1 category

Q: How exciting is it to play against Pakistan and if there is rivalry
against the number 1 team in the world. Who is the number 1 player?

The spirit, enthusiasm and nature is as same as to normal stream cricket, a match between India and Pakistan. It could have carried in us watching the normal game. We don’t worry much losing to England than Pakistan. Defeating Pakistan is a feel of big accomplishment. The top 2 countries are Pakistan and India, for the many years Pakistan were the champions. It’s recently in 2012 India become the world champion defeating Pakistan in the finals in 2020 world cup.

Q: Also, are you a batsman or a bowler?

Q: When did you first play for our country?

In 2010, against England at Birmingham.

I was very delighted, thrilled, excited to play. Finally I could make my dream true. I was feeling very privileged playing for the nation as if I’ve grown in a day all sudden. I was feeling like celebrity, an important face like Sachin. I resolved to create something incredible so that this series remind all cricketers of my contribution for ever. Because I am slightly unlucky when it comes to opportunities, though I’m put all the efforts, still owing to some reasons opportunity slips from my hand. I played thinking this is my last tournament therefore I had to give my best. But thankfully luck favored me for three years and consecutively have played for the country so far.

Q: Where did you get trained for cricket?

I would never forget Devnar School for the Blind where I did my schooling and learnt real life and Cricket of course. I was in fifth standard when I happened to come across game of cricket with sound ball. I was amazed to know about it.

As cricket has been my favorite game and have been playing since the time I had partial vision. I was a very active player all the time playing with friends and neighbors. But when my eye vision drastically reduced, I didn’t understand what was happening with me. It was very difficult to accept that I’m a visually impaired person having some vision problem. When I used to play with rubber ball in the streets and school ground, with  very little vision in the eye; struggling to see the ball, failing to stop the ball or misjudge, I couldn’t realize that I’m a category belongs to person with visually challenges. I was 9 years old when I was admitted into Devnar school. It was then when I understood that I’m alike the students in Devnar Perhaps (Blind).

It was Mr. Chandrasekar the PET who trained me and others for which I’m grateful to him for his seamless effort. I owe gratitude to Devnar school and P Chandrashekar.

Q; What has been your most memorable moment on field?

There are many. But  whenever I recall I think of playing cricket specially on field. The first release of ball from hand while bowling my first ever international ball on wicket, going straight hit the middle stump , which proved that Mahender is a dangerous wicket taker. 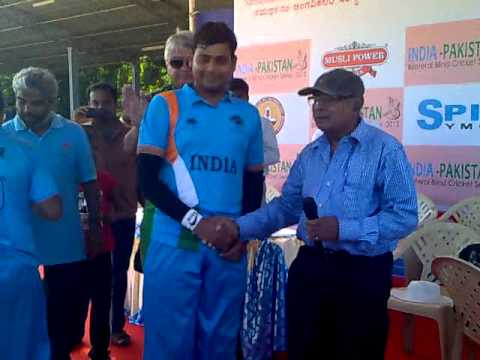 The second one is against Pakistan in 2012 when two powerful set bats men on crease who banged me in the first spell. It was my last bowling over, the first ball of the over taking off the field the danger set man, caught in the mid wicket. When the 2nd dangerous man came to batting crease changing the end, similarly got out like the first man. So I was on hatrick. One more world record to get register on my name if I could take wicket on 3rd ball also. But that couldn’t happen. On 4th and 5th delivery I got another 2 consecutive wickets. And again I was on hatrick! one more opportunity to create world record to become first man to take hatrick. But again this time also I failed. Four wickets, 1 run, in that over ; the best over of so far ever makes me to recall again and again.

I was vice captain in designation but led team from front. My nature is to encourage and be friendly with the team. My decisions were respected by the captain and others in team. When we won the series in India against world champion Pakistan, I was the VC and my strategic planning helped defeating Pakistan. This satisfied me a lot.

Q: Since how long have you been playing for India? What are your other roles in the cricket association apart from being a cricketer?

On field, have been playing for India since 2010. But I’ve got the opportunity to play for India in the past during second  world cup at Chennai in 2002, and 2006-07 but unfortunately couldn’t appear  due to final matriculation and degree examination.

Cricket has been my passion for years since childhood. Students are normally punished by teachers at school for their irresponsiveness towards education, negligence and stubbornness. Perhaps, I was only the student got punished for playing cricket, despite being studious in the class.

I’m not only a cricketer but also take role in organizing cricket tournaments. I’m the vice President of Andhra Pradesh Cricket Association for the Blind. I wish to create opportunities and conduct tournaments with the help of private donors for those who like me have the determination and love for cricket, would help in. My aim is to expose people with visual impairment (PVI) to everybody in the society through cricket that their abilities are much on par with normal players. Through cricket, I would like to improve their personality, increase their confidence level, make them fight with all odds and this make them feel responsible, so that they can feel good about their valuable life.

Q: You have won  an award from LV Prasad Institute for your contribution in Cricket. Do you think such awards will gain more recognition for Indian Blind Cricket?

Such awards have to be many. Playing for years that was the first highest recognition I would say, everybody should be recognized, they all deserve to be. Such civil societies, NGOs private institutes and particularly government should encourage and recognize such incredible game and players. This would motivate the players and help in boosting confidence.

Q: Can you tell more about the Ngo Samanvai and your role there?

Samanvai is an NGO to support Blind and multiple disabled. It helps to rehabilitate kids with special need and concern. Samanvai helps to teach computers PVI, record and scan study material, education support, employment, mentoring and such help to the welfare of PWD in general and particularly PVI.

It’s an initiative flourished by group of active volunteers who were helping needy like me during my post shool. I’m also an active member who regularly participates in organization management to help the needy in education and skill enhancement. I help in counseling, career guidance, organizing events/picnic and cricket tournament.

Q: What are your future plans in the field of cricket?

Getting place to play—nobody is willing to help in providing ground and at least not encouraging makes me sad. That’s the reason if we can own a cricket ground then no one can stop us from playing.

Q: Are there enough players coming through the system, if there is one and how  would you like to make it better for more players to come in and play?

We are fighting for BCCI affiliation to adopt this game like did in the case of women cricket. We have been fighting for years but, BCCI strike offs ignoring to least. There are enormous talented players emerging every year, the competition is rapidly growing but, there are not getting enough opportunity to prove.

To create more and more opportunity and recognition, we are asking every state to have Cricket Board to monitor, organize and control game in the states. This will help players providing at least opportunities to some extent. Equally we are lobbying for the game recognition, focus and support so that this special game is respected and worshiped by all in the society. If these players are also equally supported and rewarded, this would help to gain self respect, centricity, satisfaction and good life because of cricket. 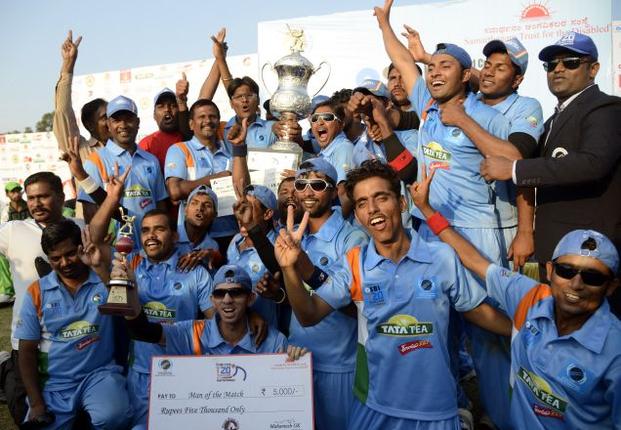