To wake up after a long hike is to wake up with a vague memory of a dream. I remembered thinking about the top of the mountain on whose side I was now tucked in. Would it be possible get to that top? I walked out and asked a porter at the hotel how I could reach the snow cap. He suggested taking a guide and ‘Gorson Top’ was about 6 to 8 kilometres away. 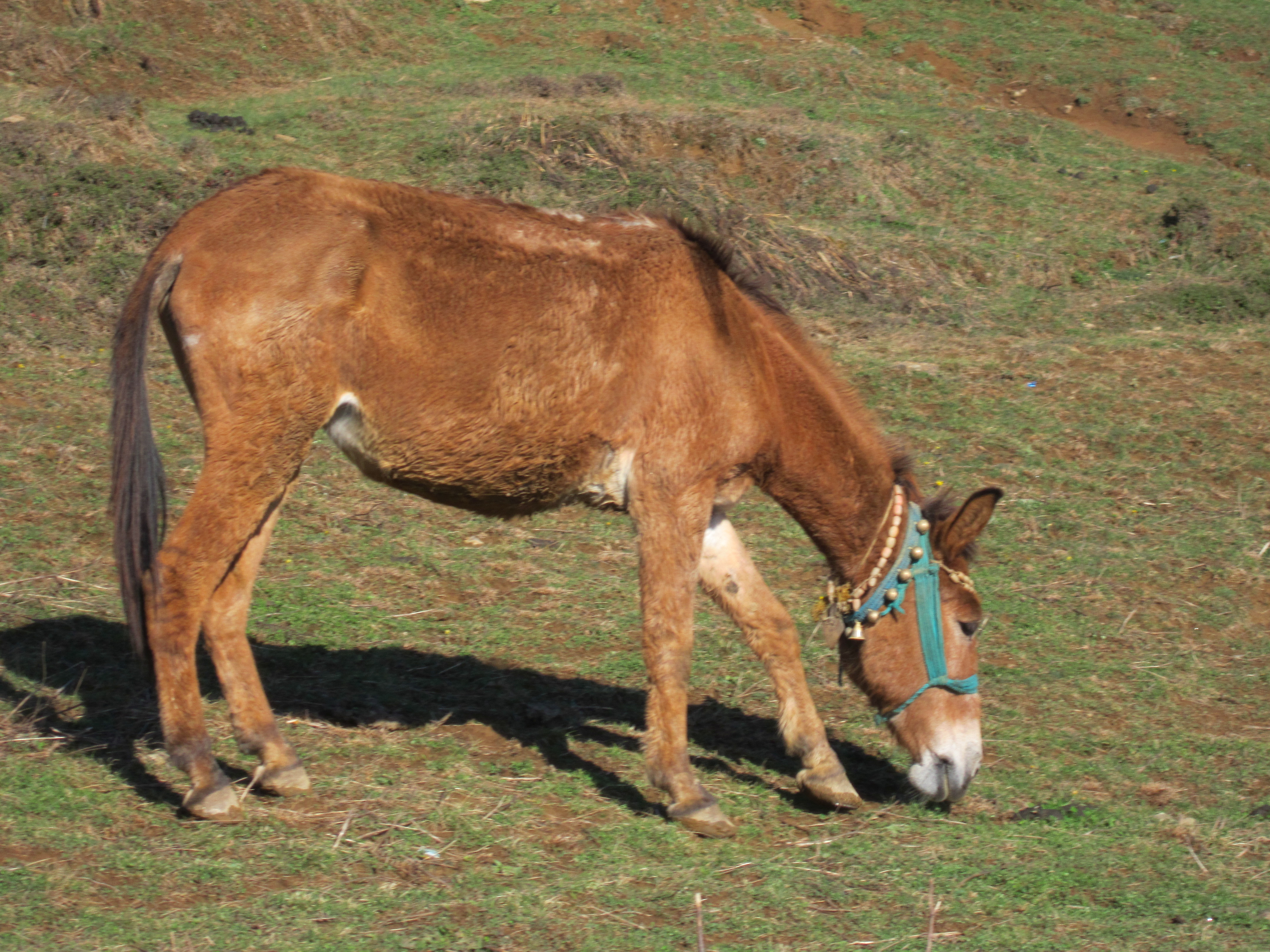 I was still the man from Mumbai but when I had walked up the ski slope to the last outpost before the forest an excitement creeped in. A young boy came up hawking his ‘khachhar’ and a few inquiries yielded the direction it was, I orientated myself with the sun and began walking. One bottle of water and a few glucose bars in my pocket.

The forest floor was damp with a freshly laid surface of autumn leaves and icy twigs. Since it was still the end of off season and the solitude in the forest was palpable. I was reminded of Reinhold Messner even though I wasn’t scaling an eight-thousander, “the important thing is to learn to behave with wild nature.” Civilised life is geared to work around us, but in nature you have to learn to yield and move with the will of all of it.

The sun had now disappeared behind the clouds and the weather is the one thing you can’t trust in the mountains. It was imperative that I found horse tracks soon, or the risk of wandering off in some wrong direction was quite real. It always helps to have a general heading though. A distinct stream was sounding through the leaves in the distance and it seemed like a good idea to follow the noise.

There were no animals or any sign of them anywhere. A little while ahead, the legs had found their rhythm and even when there wre lingering doubts about my route, the kaleidoscope of green, brown and white kept one moving. After quite a trek I stopped to look around and saw a few flags fluttering in the distance.

The heavy breathing disappeared and the relief took away any sign of tiredness. That I had not been walking completely off track or worse, in circles. The water was still audible through the silence, it finally struck me that it wasn’t a stream but the dry leaves rustling in the wind. I would come to know only later that following the sound is the easiest way to get lost in alpine forests. 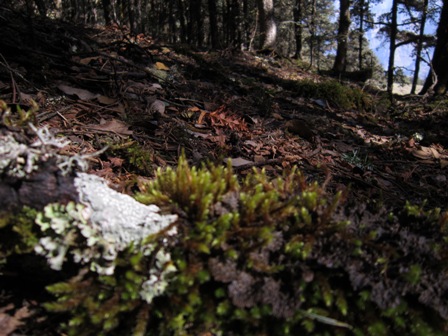 The slope ahead had started angling higher and a little distance ahead I reached a clearing with a view worth every tired step. The trees had been left behind and there was only soft drying grass between me and the frozen top about three quarters of a kilometre away and on the opposite side was an entire face of the frozen upper Himalayas with the green tree tops obscuring the valley below.

Each step was harder now that the slope had become steeper still and because the trees were gone the wind was doing its bit. With a single jacket that didn’t breathe, the wind bit into the skin and froze the sweat below the jacket. It was possibly the best acclimatising trek one could ask for, I told myselflooking up at the top of the peak, so I had to keep moving.

I should have had some breakfast, was one of the biggest lessons. But, finally I was there. A hundred meters of frozen ground stared back at me. Even though I didn’t have the proper shoes it would have been worth the fall. So, carefully and carelessly I trudged up and hoisted myself up to the top. I had run out of breath and words.

Few things can be better than the feeling of being on top of a mountain looking out at the Nanda Devi ‘peaking’ out from behind clouds. The wind continuing its symphony, here and at such places you could meditate with your eyes open. I sat there long enough that I ran out of water and the pain in my legs from the last two days of walking had made its point. Beyond the grey and white range was Badrinath, Kedarnath, Tibet and then China. A sense of scale is sometimes difficult in front of such massifs.

The hike back was a daze as returning often is. There is a getting used to that is involved in hiking down a hill or you could severely damage your knee caps. I was still to learn that. I could not stop, I was too hungry and too tired for rest even. The Gujarati family I had met at the hotel were now coming up. All four of them had khachhars, the youngest was walking next to his and the two guides walking ahead. 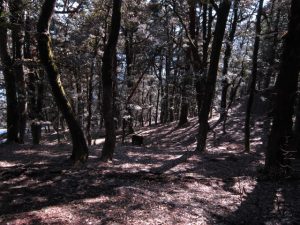 “How hard is the hike? Can we do it without the horses?” one of them asked in Hindi. Immediately the young guides looked back at me, I told them it would not be possible on foot and that I had myself needed a horse.

Back at the hotel in Auli, the momentum took me through the trek to Joshimath. On reaching Auli I overheard that there were bears in the forest at Gorson Top and going alone was not the best idea. 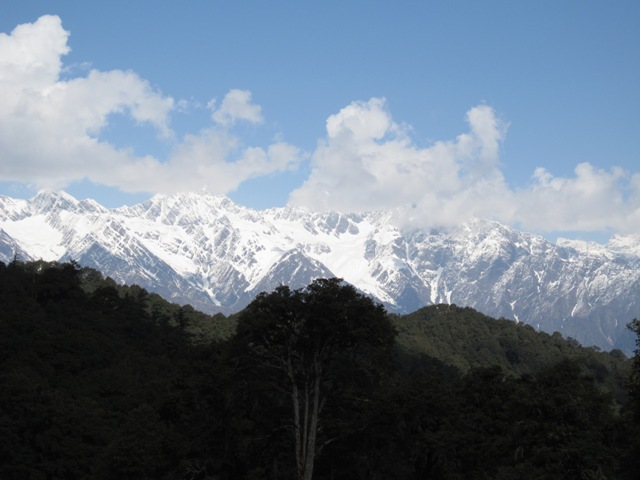 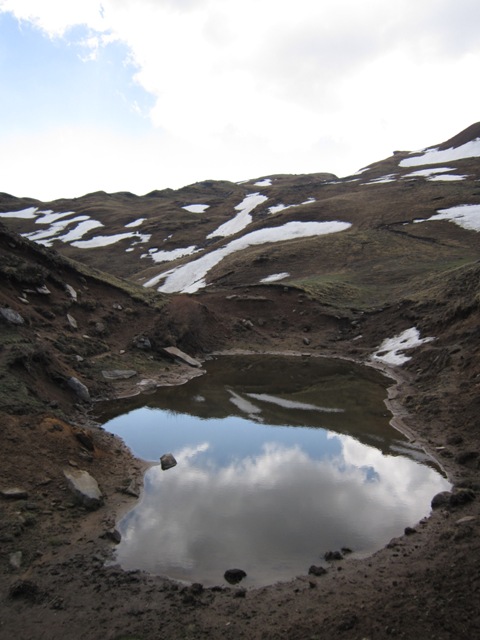 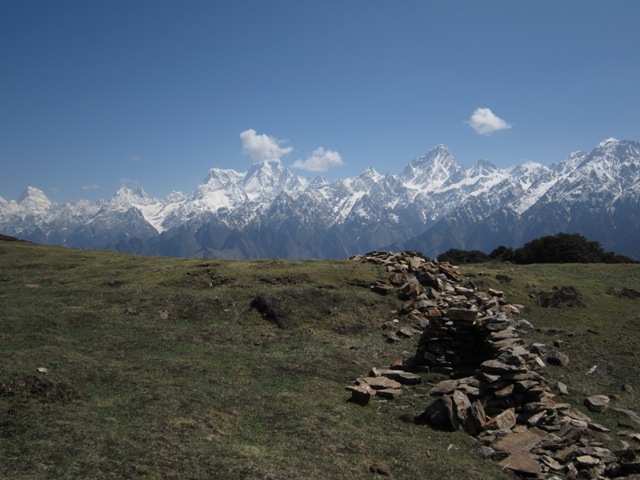 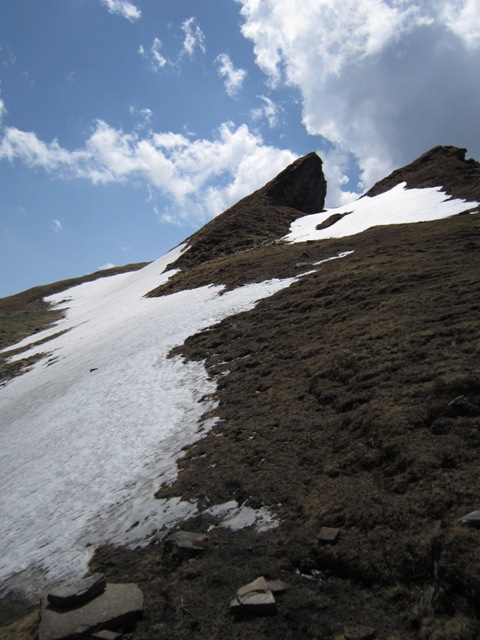 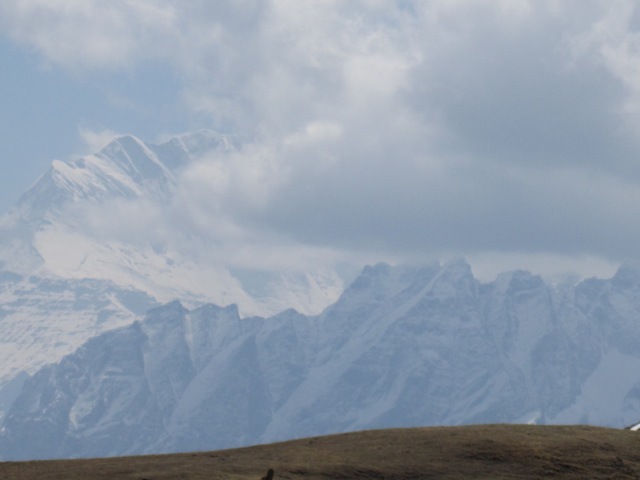