Dehradun : If the performance of the Aam Aadmi Party (AAP) in the Delhi assembly elections reflect what honest politics can achieve and that the masses are fed up with politics associated with crime and corruption, the almost wipe out of the Uttarakhand Kranti Dal (UKD) in this small hill state had sent this message loud and clear quite some time back, but the UKD leaders adopted the ostrich syndrome.

Not mincing words, Kashi Singh Aeri, central president of the party that has split into atleast three factions over the past few years, allegedly because of personal ambitions and aspirations for power of a select handful, said that the victory and unbelievable performance of AAP in Delhi should be a lesson for the UKD and its leaders. 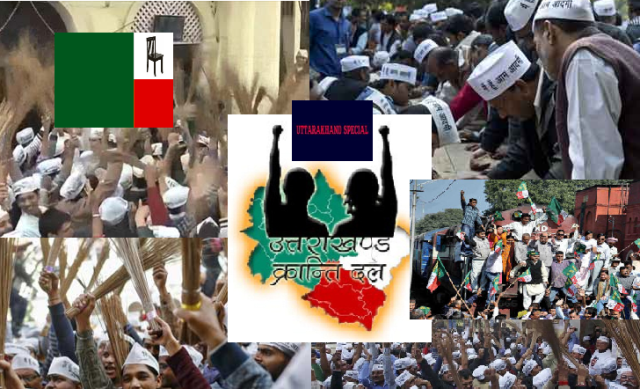 While political pundits here said that the beyond expected performance of AAP that romped home winning 28 seats in the short time that it has been existence was primarily because of the fact that it was the first time that an election was fought on the basis of truth and honesty, minus any leaders of stature and common man on the street who humbled political bigwigs.

“It is a contrast, here is a party that started from scratch and managed to create not a ripple but a wave for itself as the man on the street associated himself with it. The juggernaut just rolled on and on not looking back and what eventually happened surprised not only seasoned and mature politicians but psephologists who had at best given AAP 18 seats, whereas it went ten better”, they claimed.

On the other hand, they pointed out, one should look at the UKD. “Here is a party whose leaders spearheaded the statehood agitation. At their call the aam aadmi of the hills took to the streets. They faced not only the lathis and bullets of the brutal PAC of Uttar Pradesh (of which it was then a part) but vagaries of nature and even the women folk came out for the cause in thousands literally”, they pointed out.

Uttarakhand Kranti Dal gave the people of the state Uttarakhand, which was carved out from Uttar Pradesh in November 2000, but personal ambitions and lust for power soon started surfacing. The spirit of sacrifice and shunning power to serve the people was conveniently forgotten as back-stabbing, betrayal for power and inner bickering came the order of the day.

The death knell of the party came with the demise of I M Badoni, the man who had envisioned a free small hill state where the people will have the power and thereby create opportunities for themselves. The ideology was the same as Kejriwal’s AAP, but in between came leaders who had other interests and the downslide of the most popular party in Uttarakhand started.

It was but normal for the masses to get disillusioned with the party as they saw the leaders not only back stabbing each other but comprising the interests of the state to get to power. “A ministerial berth was mote important for some of its leaders than trying to meet the aspirations of the masses and the message percolated loud and clear that the party was no longer for the man on the street”, political pundits here felt.

Taking a cue Aeri said that UKD and its leaders should learn from the performance of AAP and start afresh yet again and make efforts to win the confidence of the masses yet again, as they had done during the statehood agitation. This is what the masses of this small hill state hope and look forward to, for they have had enough of the corrupt governance that has shaken the very foundation of Uttarakhand.