Chitkul/Kinnaur: Public sector telephone services provider BSNL as part of its social responsibility towards remote and far flung areas, achieved another feat by making its BTS tower at Chitkul, on the Indo-Tibetan border post of Kinnaur, operational on 16.12.2013.

The tower with a direct VSAT linkage has started providing mobile telephone services in the remote and high altitude area before the onset of severe winter conditions in the region. 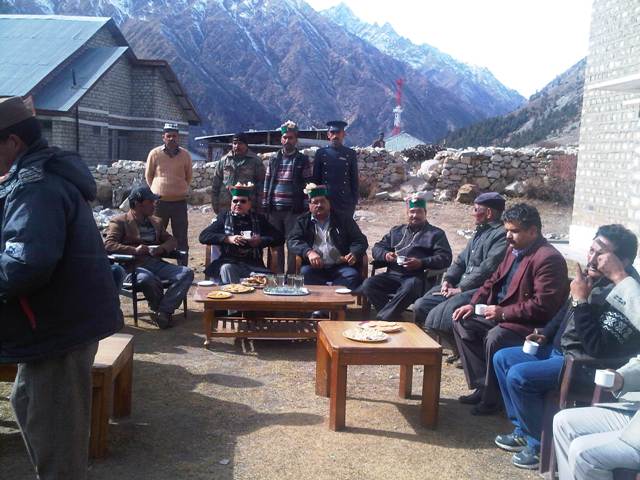 Chairman-cum Managing Director of BSNL RS Upadhyay had paid a personal visit to Chitkul on 2.12.2013 to oversee that work on setting up the tower was progressing on schedule.

The BSNL tower at Chitkul will provide mobile connectivity to the over 700 residents of Chitkul village, about 400 para military forces personnel stationed in the area to guard the border and the many tourists, which include many foreigners, who visit the valley every year.

“The service has been extended to the last village in Sangla Valley and is part of the social service that BSNL responsibly extends to remote and far flung areas. We do not expect to make any profits from increasing the coverage area to this region but count it is as a duty done towards the nation,” said Pradeep Kumar Chief General Manager BSNL Shimla.

BSNL engineers, who are presently operating the newly opened tower with the electricity, have approached the state government for installing solar panels to provide uninterrupted power supply to the tower, as the power supply to this tribal region does get affected under heavy snow conditions, said Prem Singh, GMTD BSNL Shimla

BSNL is the only mobile service provider to set up BTS towers in upper Kinnaur and Spiti valley, said MC Singh, Additional General Manager BSNL, Shimla. Other than the tower at Chitkul, BSNL has also set up BTS towers at Giabong in Ropa Valley, Namgiya, Samdhu, Nako, Chango, Tabo, Kaza and Lossar. Work on setting up towers Sagnam and Dhanker in Spiti Valley is in an advanced stage, he added.

BSNL is the oldest and largest telephony services provider in Himachal Pradesh, where it offers mobile, landline, broadband, 2G and 3G services and a host of other services under plans suiting all pockets.