Shimla: Deadly mix of freezing cold weather conditions, hot free flow of liquors, blaring music accompanied by rowdy dancing, traffic halted to a snarls pace, policemen relaxing tough regulations to let revelers make the best in ringing in the New Year is how the city celebrates the evening of the year passing out.

Much of the day was spent in driving to crowded scenic spots at Fagu, Kufri, Naldhera, Hassan Valley but as the evening came on, all roads for tourists and residents headed to The Ridge and The Mall. 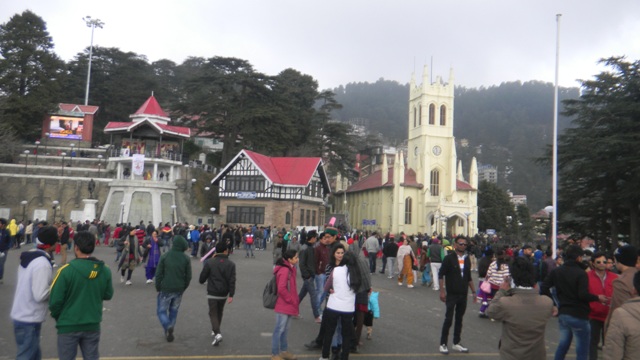 The daylong overcast sky kept temperatures at freezing levels and at times when some snowflakes did fall, jubilant crowds let out war cries.

Those who dared to drive to Kufri, were however, greeting a New Year eve snowfall, something that is becoming rarer and rarer for the hill station over the decades.

After a long lean season, hotels were packed to capacity and many of them had organised special inhouse programs to keep guest engaged.

The weatherman’s forecast of snow for the day did disappoint many but hopes of an overnight snowfall remained alive.

Police handed traffic violation tickets to 179 only vehicles though the city is jam packed with more vehicles than the poor road infrastructure can handle and only booked 8 persons for smoking in public places, on a day when liquor consumption and smokers was on a high.

A total of Rs 28,800/- was collected as fines for traffic violations and smoking in public places, something that is prohibited in the smoke free city.