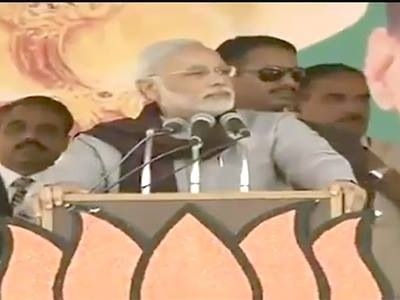 Dehra Dun : BJP prime ministerial candidate Narendra Modi today said that the Congress had taken politics to a level where it had become indifferent to the pain and suffering of the people, and even depriving them of relief, which could help their at their time of need, adding that it was inhuman to play politics at such critical juncture.

In an oblique reference to the circumstances created by the Uttarakhand government, following which he had to leave the state, despite having come here to provide relief and succor in the wake of the tragedy that hit the Kedarnath valley in June this year, he lambasted the Vijay Bahuguna government for not rising to the occasion to mitigate the suffering of the flood hit.

He recalled that when Gujerat had been hit by a high intensity earthquake and there was devastation all around, he had welcomed the relief that had come to the state and even welcomed the gesture from various parts of the country, as it provided much needed succor to the people his state at a time of crisis.

Addressing a huge rally, with the masses spilling out of the parade ground into the streets on all four sides of the venue, Modi said that both the Congress governments at the centre and the state were indifferent to the needs of the youth of this small hill state and expected that they leave their hearth and homes and stay in the jhuggis of the plains.

He said that no employment potential had been created for the youth and the tourism potential of Uttarakhand had taken a beating because of which the people had to search for fresh avenues to eke a living. “It is a tragedy that for the years the youth of Uttarakhand that has been giving his life at the borders for the defence of the country, was being left in the lurch with neither the state nor the country doing anything for them”, he added.
Taking a dig at the hurry now being shown by the UPA government at the centre to pass the Lokpal Bill, he said that if the Congress was so committed to it, the Vijay Bahuguna government in Uttarakhand would have implemented the Lokpal Bill passed by the BJP government led by B C Khanduri and signed by the President, rather than outing it on the back burner.

Asserting that the move for implementing the Lokpal Bill was only to throw dust into the yees of the masses, the BJP prime ministerial candidate said that recently concluded vidhan sabha elections in the five states had shown the Congress in whose favour the wind was blowing. “There is a growing resentment against the Congress and the winds are blowing the BJP way”, he said amidst loud applause.

He said that Uttarakhand is also known as devbhoomi and the 125 crore people of this country at some time or another in their lives visit the pilgrim destinations in this small hill state. “The people not only from India but from various corners of the world come in search of peace and tranquility in the environs of this beautiful state, which was left in the lurch by the centre after the June tragedy”, he claimed.

Modi said that Uttarakhand is a reservoir of medicinal herbs and plants and they need to be exploited to the hilt to provide cheap ayurvedic medicines to the masses and employmkent to the youth. “But the Congress governments at the centre and the state are targeting Baba Ramdev, who is producing the medicines and even teaching the people to live a healthy and disease free life”, he pointed out.

Incidentally the state unit of the BJP had worked overtime for the success of the Modi rally and had literally painted the town saffron. Posters, banners and cloth arcades could be seen all over the town, even as the Congress alleged that about Rs 15 to Rs 20 crores had been spent by the BJP for rally and had forcibly collected money from businessmen in town.