The LokPal Bill will be passed in the next few days in its present imperfect form. The Congress is desperate to remove this weapon from Kejriwal’s armoury, the BJP dare not be the spoil sport and no one cares anymore about the anti-diluvian mutterings of the Samajwadi property.

A lot of credit for this must go to Anna Hazare whose obstinate idealism embedded this demand firmly in the nation’s conscience last year. But since then Anna has lost his way. 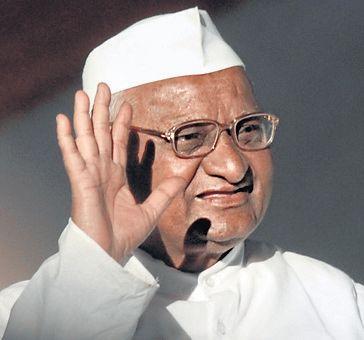 One can overlook the fundamental difference of opinion between Anna and Kejriwal about the course to follow post the Jantar Mantar protests: their parting of ways was a natural consequence of their differing perceptions and ideologies.

But whereas Kejriwal marched onwards to his new destiny under the illusion that he still retained at least the blessings( if not actual support) of the old war horse, it is now becoming increasingly clear that Anna harboured a lot of rancour and illwill towards his former protege for daring to differ. Nothing else can explain his curious behaviour since then.

Ever since Kejriwal and his group took the paradigm-changing decision to go political the Anna rump has been constantly sniping at him, realising fully well that this could only strengthen the Goliaths whom the former had taken on in a trench war-fare( whereas Anna himself had retired to the comforts of the Jindal spa in Bangalore).

Beginning with sniping shots about Kejriwal’s political ambitions( what’s wrong with that in a democracy, anyway?) it quickly developed into a fusillade of accusations and innuendos about his using Anna’s Lok Pal issue to garner support and raising questions on the use of funds collected during the earlier movement.

As it turned out, neither of the charges was correct but they took away a lot of the energy and time of the fledgling party to counter. It also brought them a lot of adverse publicity from TV anchors who right then were short of news and were willing to scavenge on any offal.

Kejriwal’s response was to rebut them in a civilised manner: he would have been well within his rights if he had behaved like Kiran Bedi and reminded the patriarch that the LokPal was not his IPR( Intellectual Property Right) and that he should also apologise for the canard about mis-use of IAC funds.

Post the recent elections the tirade by the Anna camp has acquired an air of desperation in the last couple of days: Kejriwal has been told not to bother to come to Ralegaon, his supporters have been thrown out of the village, he has been reminded that the credit for the LokPal Bill belongs to Anna exclusively, and that he is an apostate for opposing the Bill.

Just when Kejriwal had routed the enemy in the front, he has been attacked on his flanks by a force he had considered his ally.

Anna Hazare has betrayed not only the Aam Aadmi Party and stabbed it in the back: he is also betraying the people who had supported his agitation in Delhi and elsewhere.

Look at the facts dispassionately and realistically. Anna cannot appropriate all credit for the LokPal movement: people like Kejriwal and Prashant Bhushan also made stellar contributions to it: in fact Anna was the moral figurehead- all strategy, planning, logistics, confrontation with authorities were scripted and executed by them, and it would be fair tosay that without their relentless efforts the movement would have petered out long ago.

And peter out it did, with the sham drama at midnight in the Rajya Sabha. The Bill went into the cold storage owned by Congress Inc. Anna went back to his idyllic village to issue dictats about hanging drunks from the tree tops.

It was Kejriwal who kept the movement and the momentum alive, not least by his realisation that he would have to enter the Augean stables if he meant to cleanse them. He decided to enter the political arena, much to the amusement, derision and moral condemnation of intellectuals, armchair conscience keepers, dyed-in-the-wool politicos and TV anchors-and Anna.

The likes of Kiran Bedi, Hegde and Gen. V.K.Singh, long used to lecturing from the pulpit instead of getting their hands dirty in the muck, rallied behind Anna to denounce Kejriwal as nursing political ambitions. Even this short-sighted behaviour would have been acceptable if not for what followed.

Kejriwal proved them all wrong. He went out into the streets to rally support in the heat of Delhi, preparing for the elections, when all other political leaders were happy to strategise from their air-conditioned rooms.

This was the time for Anna and his advisors to have supported him, but it was probably at this time that they started feeling side-lined and marginalised by the massive response that the AAP started receiving from the common public.

Anna’s hubris now took over, ably aided and abetted by the likes of Kiran Bedi, Hegde and the General, all blue blooded ex-members of the power pyramid who could not stomach a lowly ex-Income Tax official from Ghaziabad stealing their thunder. They did all in their power to ensure that he came a cropper in the elections.

They failed miserably, but they cost him at least ten seats, and deprived him of the clear majority that he needed to form the Govt. And still they continue to hound him, to the point where they have compromised on their own LokPal Bill, and now support the Congress Bill which lacks some of the major provisions they once swore by.

They are now denouncing Kejriwal for insisting on the passage of the Bill they themselves had drafted!
Their intentions have now become clear- Anna is desperate to claim credit for a Lok Pal Bill, any Bill, even a truncated one, so that Kejriwal and AAP can be denied the credit for the real Bill ( which, I have no doubt, the people would get if only Anna put his weight behind the AAP).

In the process, if AAP can be halted in its tracks and its march towards a repeat performance in the General Elections next year slowed down, so much the better.

Anna Hazare and his gang have lost the public space to Kejriwal and the AAP and are now desperate to reclaim it, even if it means supping with the devil. But I have a feeling that they will be proved wrong once again-the people of Delhi will see through their miserable strategems and power plays.

It is time for Anna Hazare to gracefully walk into the sunset and not try to do more damage to to the first real chance we have had since Independence to introduce real democratic principles in our polity.