It may not be the first of its kind, neither does talented filmmaker Anurag Kashyap boast about it as such. In fact, it was his wife Kalki who featured in a video ‘It’s All Your Fault’ showcasing the same cause at first that her loving husband only followed. He did tag along on the matching footsteps, but in his uncontaminated trademark style.

Anurag Kashyap, our very own ‘Quentin Tarantino’, has come up with a ‘21 minute and 35 seconds’ long short film exclusively spun around the burning issue concerning our society about eve-teasing and gender sensitization. 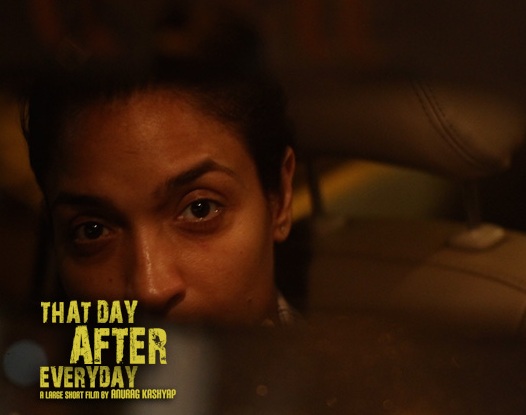 Very few, if any, can brave up to the maker of critically acclaimed movies such as ‘ Gangs of Wasseypur’ and ‘Gulal’ when it comes at bringing forth the real alarming tales of society. The stories which are otherwise too noticeable, but low on commercial count, seldom stumble upon any takers. But, if you are Anurag Kashyap, no story is too irrelevant to find a screening.

The hard hitting ‘large short’ film by the avant-garde movie maker of modern Hindi cinema knocks profoundly on the broad patriarchal psyche of males, in a country where a woman is worshipped as ‘Devi’.

‘That Day after Everyday’ is a narrative about 3 working women who take to the gross injustice customary against the fairer sex on the streets of our so called modern cities.

Despite being burdened by societal pressure, these brave hearts dare to hit back at the face of these demons hiding under the male skins. The short movie exposes the ruthless reality of our male chauvinistic society that still resides with a prejudice against women and brags glory in its stale hidebound attitude.

The portrayal gets a tad dreamlike in the concluding portion, but only a short movie film maker can comprehend what it takes to bind a story in the shortest possible time frame. So, a few glitches shouldn’t undermine the fundamental cause.

Tumbhi Group that is run by Anurag and some of his associates, is already producing many short movies but this one, (it has gone viral on the internet) will enthuse many other independent movie makers (short films) to come up with comparable projects.

When bodies of women are being increasingly objectified by our filmmakers, such movies undeniably make a worthwhile point.