Master film craftsman Sanjay Leela Bhansali is back again, this time with added magic and grandeur. With unabashed audacity, the filmmaker has elaborately & intelligently molded the traditional concept of love winning over hatred in the most genuine and melodramatic way possible. 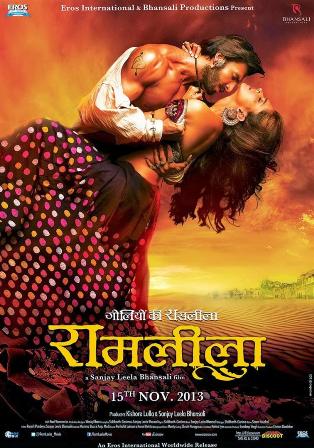 Goliyon ki Rasleela: Ram-Leela, the movie that hit screen with a name changed, in response to orders from Delhi High court, is probably his best work since Hum Dil de Chuke Sanam.

In short, Bhansali’s drama, which is an adaptation of the Shakespearean epic love story Romeo-Juliet, transports you into a fancy dream in the 2 hours 35 minutes screening, feeding you with stunning cinematography, palatial sets, elaborately picturized dance numbers and love scenes enacted passionately.

The story is woven in the periphery of a small fictional slow paced town named Ranjaar, positioned somewhere in Rajasthan-Gujarat. Projected to be notoriously famous for its gun-bullet culture, the land witnesses countless bloody battles, owing to a 500 years old rivalry among the Rajadi and Sanera clans.

In such a backdrop, where bloodshed has seeped into the very genes, a fanatical love saga erupts between Ram & Leela, perfectly tucked in a seductive cover and colors of Holi. Ghost of the age old rivalry haunts the newfound love and the young lovers, against their wishes, part ways.

The lively couple run into each other during Holi celebrations – flirt unflinchingly to a degree where lust gets hold of them. Love having got hold of the beauty and the beast, the young lovers exchange vows of belonging to each other forever.

Bhansali’s latest venture is as energizing and packed with capturing light-and-sound show, with a thrill for secret moonlight meetings about dreamy first love sequences – the film enjoys traditional fictional setting surrounding the contemporary soul. The cinematography stands out, with Ravi Varman coming out with truly graceful work.

Drafted on a violent-romantic theme, the movie, thankfully, nowhere exposes audience to sheer blood thirsty scenes, being heavily exploited by other filmmakers these days. There is an exception, the betel nut cracker scene can disturb dreams.

Biri smoking Supriya Pathak Kapoor (playing Dhankor Don) steals the show with her cold-hearted authoritative violent ‘Godmother’ ways. The veteran actress, who is a perfect fit for Gujarati roles, is at her theatrical best.

Richa Chaddha, Gangs of Wasseypur fame, comes up with a settled down, but graciously dignified act, playing sister-in-law to Leela. The same goes for Barkha Bisht in her role as Ram’s Bhabhi.

Gulshan Devaiah comes up ranks in his role of astute conspirator who dreams to dethrone Pathak one day. Abhimanyu Singh, as Ram’s elder brother is as delightfully intrepid in his acting, as he was seen in Gulaal.

Sharad Kelkar as Leela’s brother has justified his presence. Bhansali needs to commended for carving out some very revitalizing and novel sequences. The entire sequence where Abhimanyu Singh is shot dead, when Sharad’s bullet misses his beer jug, are classic scenes in the film.

And, Ranveer Singh describing his love for wife Leela in an emotional and drunk sequence to his friends is reminiscent of Amitabh Bachhan’s ‘daru pine se liver kharab ho jata hai’ dialogue in Satte pe Satta.

Deepika lets her deep intense eyes talk for her. She is splendid both in aggressive repartee with Ram earlier and the heartrending portions later.  Their highly intense and intimate moments, which are in plenty, define how exactly intense chemistry should be drawn between love-struck characters. Additionally, peacocks add long-lasting flavor to the chemistry, with their back-drop loud screams.

Ultimately, it was Bhansali’s film that deserves credit for his screenplay, direction, music (along with Monty Sharma) and editing. His love for his culture radiates in every scene and music. But, even a filmmaker of Sanjay Bhansali’s caliber had to take resort in Priyanka Chopra, incorporating a bawdy item song, which unsurprisingly has gone down well with the audiences. Shruti Mahajan plays a significant role with her casting.

The length of the film (and song every minute) plays a wet blanket for some, but, intelligent romantic tales do require a space to flow in smoothly. Rose n Guns, usually don’t come together, but this Gujju tale, which is adorned with colorful costumes and amazingly choreographed dance numbers, is all about breaking stereotypes.

The movie gets 4 stars on the scale of 5 from Hillpost.