Shimla: Strong demand for opening of old Shipki La Pass route for pilgrimage to Lake Mansarovar and Mount Kailash notwithstanding, international trade at the high altitude India – China border post in Kinnaur for the first time crossed the Rs 5 crore mark this year.

With the trading season at the post scheduled to close in a day, Ved Sharma, General Manager Industries disclosed that during the year Indian traders exported goods worth Rs 2.03 crore and imports at the post crossed Rs 3.28 crore.

Where earlier trade was permitted only in 15 items, adding another 12 items, which included carpets, spices, handloom, religious articles, herbal medicines shoes and readymade garments is considered to have increased the trading volumes in the year.

The Kinnaur administration had issued licenses to 59 traders this year. “The number of traders was more this year,” says JM Pathania, the district administrator. 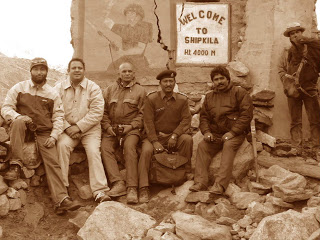 The import figure was significant because the Indian government has imposed a ban on import of livestock, which earlier was substantial at the Shipki trade post.

Chamurthi horses, known for their nimble footedness in rough and high altitude terrains and Chigu goats were the main livestock on the import list of Kinnaur and Spiti residents.

Reared for it wool, the Chigu goat also provide soft meat during the long winter months in a region that is over 3000 meters. In 2012, more than 2000 goats were imported from China.

The Customs Preventive Commisionarate, Amritsar informed the Kinnaur authorities  that the Indian government had banned import of livestock from China. Though Indian and Chinese traders attempted to revoke the ban but to no avail.

Last year goods worth Rs 90 lakh were exported and the imports were only Rs 62 lakh, data with the industries department showed. Tobacco was high on the export list last year with the authorities recording 23,000 kilograms being sent into Tibet at the post.

Easing of India – China relations after the 1962 border conflict, the Shipki trading post was ones to be opened in 1994 on the long Himalayan border that the two big Asian countries share. In the opening year Indian imports were Rs 14 lakhs and imports was Rs 11 lakh.

Prior to the India – China conflict, the old Hindustan Tibet trade route passed through Shipki La and formed part of a connecting route to the great silk route.

It was also a route which pilgrims also used to reach Lake Mansarovar and Mount Kailash. The Himachal Pradesh government has been raising the issue for re-opening of the route for many years.