Shimla:  With the number of FIRs filed against the Himachal Pradesh Cricket Association and subsequent seizing of all its properties in a midnight operation in the State, the Himachal Pradesh government has now started promoting a small time rural Shimla based NGO, Himachal Sports Culture and Environment owned by Chief Minister Virbhadra’s son Vikram Aditya in an orchestrated way.

A once small time sports body, organising some rural matches is now being pitted against the HPCA at the State level. On the occasion of a cricket match between the Governor XI and Chief Minister XI on Sunday Mr Virbhadra Singh hugely lauded the efforts of this body headed by his son and said that such tournaments should be made as regular features in the coming times. 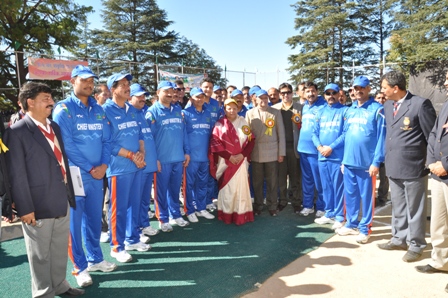 The HPCA is being headed by the BJP MP and former Chief Minister Prem Kumar Dhumal’s son Anurag Thakur. He had recently moved to the Court against the unpopular government’s decision of seizing the HPCA properties and got an immediate respite. The Court had condemned the forcible dispossession and had ordered the government to restore the status quo.

All the State BJP legislators who were earlier part of the Chief Minister XI preferred to stay away from the match today because of this petty politicking in cricket. They withdrew their names after releasing that Mr Virbhadra’s son is organising the tournament and it would be a part of launching his organisation by the Chief Minister, said a BJP MLA. 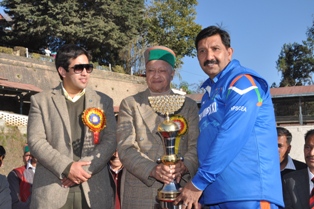 Mr Vikram Aditya was seen with his father in the prize distribution ceremony of the match which was won by a huge margin of 123 runs by the Governor’s Eleven that was represented by a young team of IAS officers. The Chief Minister’s Eleven was represented by MLAs from Congress party. Mr Vikram said the amount of Rs 4.51 lakh collected for this charity match will be donated to the Chief Minister’s relief fund.

With the HPCA under the government scanner, Virbhadra’s son who is going to be elected as the new Youth Congress Chief tomorrow is expected to organise some more important cricket matches in the coming days under the auspices of this sports body, said sources.

But the desperation of Chief Minister to launch his son through cricket or Youth Congress is inviting criticism form his own party men. Former party General Secretary Kuldeep Rathore had openly requested him to restrain from letting his son fight the youth congress presidentship.

Who would dare to vote against the son of a Chief Minister and a Loksabha MP, asked Rathore, while questioning the democratic content in such organisational elections? Vikram Aditya was unseated last time also by a monitoring agency authorised by Rahul Gandhi on the charges of uneven playing field given to the other contenders.