Nutshell: Circumstances turn simpleton Raja Mishra into a dreaded gangster Bullet Raja, who creates a name for himself in the badlands of Uttar Pradesh.

Oops, the director missed it by miles! A Sholay recast, where ‘tamanchas’ played the musical notes in the background, throughout; does stand on a plot as dear to Ramesh Sippy as to Abhinav Kashyap, but pulling of such exceedingly commercial scripts, is rarely a cup of tea for creative filmmakers like Tigmasnhu Dhulia – Good that Irrfan Khan saved himself for better days of Dhulia. 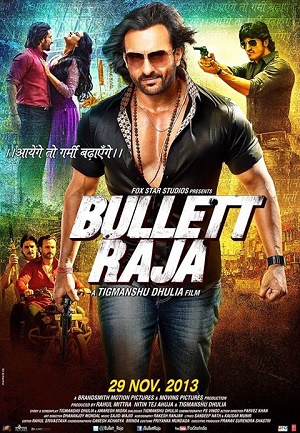 What really went off beam? Almost everything. Those who barged into the cinema hall expecting Saif to be delivering another ‘Langra Tyagi’ were seen searching for water in a dry well, after getting bitten badly. In hanker to savor the bona fide commercial cinema, Tigmanshu cooked up a comedy of errors, which substituted distinctive Bollywood masala for concrete storyline, and only diluted his hard earned credibility.

It was least expected from talented director, who has produced decisively acclaimed movies such as Pan Singh Tomar and Hasil in the past. Showing up typical caste ridden politics and archetypal badland gangster ways of UP, doesn’t make a story another Hasil, and surely Dhulia was in knows it. But, as love and lust stand on a thin line of difference, so is creativity and innovation.

Starting on a confusing note, straight up, Raja Mishra (Saif Ali Khan) drops into marriage ceremony where host was Rudra Pratap’s (Jimmy Shergill) family. After gulping down some free whisky shots, and dancing to a rauncy number from aging Mahie Gill, Raja and Rudra Pratap take on drunken friendship promises. Soon, Lallan (Chunkey Pandey), who loves reciting Brahma story, enters the scene and blasts up the house with his riflemen, but for no understandable reasons. Here comes our Jai-Veeru taking on the bad men with their spotless gun shots, flawlessly aiming for enemy’s fine hair strand, despite having nothing to do with guns and gonndagardi, till then.

Now, commences a battle royale, and both find themselves warming benches behind bars. Here, they meet self-proclaimed political advisor Srivastva who is as techno savvy with his Skype and dozens of smart phones, as Saif in his real life. He introduces these unenthusiastic sharpshooters as ‘political commandos’ to Ram Babu Shukla (Raj Babbar) – “tum mamooli sipahi nhi ho, tum political commandos ho” – that’s exciting!

Then begins a real battering ram of fist, with powerful political financer, Bajaj (Gulshan Grover) getting kidnapped and some imprudent conspiracies to follow. By the time, Ravi Kissen, the sidelined sharp shooter of Babbar, enters the landscape too, and dynamite duo get to face music of their life. The tale ends with ace cop Arun Singh Munna (Vidyut Jamwal) playing a real spoilsport for the bad netas of Purvanchal. And, of course, there is Sonakhsi Sinha (Mitali) too.

So, was this narrative fresh? Maybe, for those, who have long lost sense of differentiating black from white.

Saif tried to do ‘Omkara’ at places especially with dialogues such as ‘Brahman bhookha to Sudama, samjhe to Chanakya aur rootha to Ravan” but looked rustic all the way. Running through the crowded make believe sets in Lucknow at one moment and performing ‘Tamanche pe disco’ (by RDB) at other, doesn’t let veracity seep into audience heads.

Saif did his bit, even tried to recompense limply crafted tale, whose ends were as distant as North and South Pole, trying unsuccessfully to make a dog bark in English. But, he was witty, macho, romantic, emotional, a family man (yes, he got his sister married too) and ruthless. Then there was Jimmy Shergill, as underutilized, as salt during food preparation. He seemed cold, and miles away from a blood loving gangster.

Ravi Kissen was fantastic as ever, but underplayed a little, especially in his double up as ‘Radha’. He promised something great in his interviews before the releases, but, maybe editing team is too vigorous with scissoring important scenes. Chunkey was as insignificant as in his lifetime. But the role of ace police officer, who loves killing Chambal ke daku single handedly with sole rifle, is worth admiring. The scene where he took upon dacoits reminds ‘Pan Singh Tomar’, but only if the movie was half as good as the National Award winner classic. And, by the way, what was Sonakshi doing here, playing Bengalai bala, with as little a space shared as storyline in the movie? But, thanks God; she had shed some pounds at last.

Dhulia tried his best to bring alive Lucknow and make Hazratganj a happening place, but only if he could have had more serious narrative in place. The movie makes sense, only when you are senseless.

*The movie gets 2 ½ stars on the scale of 5 from Hillpost.