Interestingly, four of the most defining movies in Amitabh Bachchan’s career now stand remade in Bollywood, with Zanjeer being the latest on the podium.

While Ageenpath and Don could still be taken into stride for their start cast, Sholay and Zanjeer can both be referred to as shoddy distortions meeting practical imperfections.

Never meant to be a great remake, this Apoorva Lakhia (known to volunteer ridiculous plots garnished with charming star cast) film is a total meltdown.

Our director though hell-benton  portraying him as an angry young man of 2013, right from the start, similar to what Prakash Mehra accomplished with rookie Amitabh in 1973 released Zanjeer, fails miserably to maintain the tempo.

In fact Teja could give Emraan Hashmi and Arjun Rampal a run for their money with his natural stone-faced expressions.

This no non-sense policeman maintains stoic artlessness, irrespective of the situation, be it a proposal by a girl, asked to resign from his job or on being beaten up by goons; with unparallel pride.

Midst all the violence portrayed, what was ironic was the Gandhian hymn ‘Raghupati Raghav Raja Ram” playing in the back ground, a song otherwise recognized for its non-violent attributes. 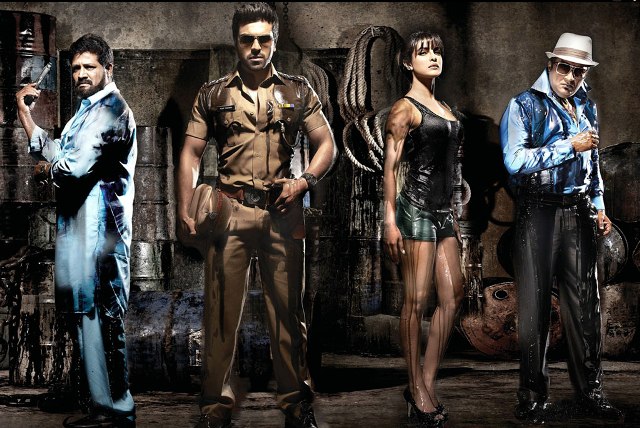 Priyanka Chopra, who plays a simple Gujarati NRI girl Mala, arrives in Mumbai to witness the wedding of her ‘Facebook’ friend, someone who she has never met in the real world. Ouch! Now this takes something to digest.

She happens to witnesses a cold blooded murder as the story moves and subsequently gets attacked by the hoodlums and in the commotion loses her passport and credit cards.

ACP Vijay offers his home as shelter to the hapless girl caught up in India’s underbelly. And here begins the typical Bollywood style love-ishq-pyar-vyar drama.

Vijay comes across Prakash Raj, who plays gangster (oil mafia) Teja, who coincidentally has even killed his parents, some years back.

In between, Vijay is suspended from service, even before taking up cudgels against the oil mafia, for his uncompromising attitude and probably a high blood pressure problem (which seems very likely as the hero does not stop beating a person once on a punching spree).

Amusingly, the suspension turns around to be boon for him, and he makes a comeback with a greater bang to destroy the entire city’s oil mafia, single handedly.

In the end it emerges that the police service was more of an obstacle than of help in cleansing the city mess. Listening Mumbai Police!

Priyanka is in no match to Jaya Bhaduri’s hyper-talkative ‘chakku churriyan’ character in the cult movie.

The pretty actress probably signed the movie just to be part of remake of Amitabh Bachchan’s movie, third time after Don and Agneepath. She also dances to a bawdy item number ‘Pinky’.

Sanjay Dutt gets to play the cult role of Sher Khan originally played by the legendary Pran. With his pot-belly, sagging eye bags and colorful Pathani-suit, he tries to reinvent the role but fails miserably and continues with the same performance that he left behind in Policegiri. His discovery channel dialogue was particularly funny.

Filling into Amitabh Bachchan’s boots is no child’s play. It can be suicidal.

Prakash Raj as Teja gangster saves the day for the movie. He loves chicken and meows much more than anything else.

In particular when he ridicules the police officer with “naam Vijay kya rakh liya ye to serious hi ho gya” itself says that mere using Zanjeer as movie name doesn’t guarantee you success. Do watch out for his insanely cruel antics stuffed with comic ingredients.

Mahie Gill plays Mona, the gangster’s kinky love starved moll. Both of them try to spice up the dull environment with double-meaning-dialogues.

He is a reporter mostly visited in Sunny Deol’s movies of 1990s, killed by the goons when travelling alone, late at night, searching for clinching proof against the bad man.

The movie takes too long to grab the defining moment. The first half is half-baked and lacks clarity.

The plot could have experimented with the story of IIM Lucknow graduate Manjunath much more artistically, who took up a lonely fight against the oil mafia and ended up losing his life.

The musical scores by Anand Raj Anand, Anjjan Ankit and Chirantan Bhatt are pathetic and don’t compliment the songs of 1970s classic in any way. Lyrics are offensive and cheap.

Heavy physical punches don’t ever seem to lend scars to the faces of the characters. Director Apoorva Lakhia needs serious introspection about his movie making skills.

The original movie written by Salim-Javed was high impact entertainment and a defining film in the career of Amitabh Bacchan, this one is a boring mechanical imitation.

Even after over four decades, it is much better to purchase a CD of the original flick than wasting bucks on this picture.

** The movie gets 2 stars on the scale of 5 from Hillpost.