Manali: Tweleve patients suffering from scrub typhus, a disease caused by the bite of an infected mite found in areas with heavy scrub vegetation, have been reported at Lady Willington Hospital Manali  disclosed  Dr Philip Alex Medical superintend of Hospital

Twelve cases was reported this year out was which three were referred to PGI Chandigarh and other were treated here said Dr Philips.

Dr Philips said that   from the last year, we have been seeing scrub typhus (presumably) in Manali. Patients present to us with fever, chills, respiratory difficulty, with or without jaundice. They may also have central nervous system symptoms, with confusion and headache. 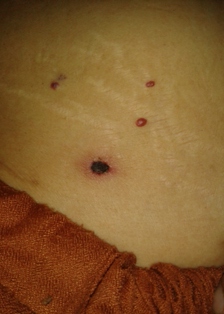 He added the characteristic Escher alerts us to the possibility of typhus. They invariably have a low platelet count and may also have leucopenia and anemia. The respiratory distress is usually progressive when diagnosed late or when they present to us late.

He further disclosed they often need ventilation and are very sick. They may also go into renal failure. The presence of jaundice and altered liver enzymes often compounds the seriousness of the disease.

He said an early initiation of doxycycline medication, blood transfusion if appropriate, and steroids with early ventilation saves lives. Four percent hospital mortality has been described.

Dr Philips said that transmitted by the trombiculid mite, chigger bites transmit the Orientia tsutsugamushi. The disease can occur a week after being bitten and the eschar by this time is a characteristic central dark necrosed area often well circumscribed and circular in appearance.

He further disclosed that diagnosis is by the indirect fluorescent antibody test or PCR, or biopsy of the Eschar. We have been informed that the Weil Felix test is available in the Kullu zonal hospital.

The clinical and laboratory picture is pretty characteristic to allow the early initiation of therapy.

Scrub typhus is becoming a problem both to diagnose and treat in time in Himachal and other areas of North India.

He revealed that the people should take extra care while cutting the grass specially in rainy season and any of the above symptoms appears they should report the matter immediately to the nearest hospital.