Shimla: Rules for leasing of government land, a sensitive issue in Himachal Pradesh, are set to be revamped as the cabinet on today approved a new draft that would be thrown open to the general public for inviting objections and suggestions.

The cabinet decided to cancel the construction of Palchan-Rohtang ropeway project in Kullu district and gave its nod to initiate action for damages/penalty against M/S Brakel Corporation which was earlier allotted the Jangi-Thopan-Powari (960MW) Hydro Project.

Venture Energies Technologies Ltd was granted 10 months extension for obtaining clearances  and starting work on the 15 MW Sai Kothi hydro project and a similar extension for 5 months was granted 24 MW Seltu Masarang project. However, the promoters would have to pay Rs 20,000 per month extension fee for the purpose, a cabinet spokesman stated.

The cabinet decided to upgrade Kotli sub tehsil to tehsil and gave its nod to  open a new tehsil at Ner Chowk in Mandi district. 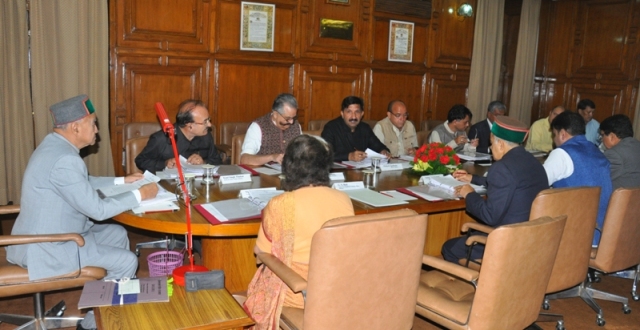 Earlier the cabinet thoroughly debated the new HP Lease Rules, 2013 draft and put forth that government land would be provided on lease basis only when no alternate private land was available.

Taking a tough stance upon encroachments, the cabinet intends not to lease out encroached government land to the encroacher but it could be given to another eligible.

Before granting government land on lease basis, no objections of estate right holders will be obtained.

Lease amount to be levied is proposed to be calculated at 10 % of the circle rate, which would be increased by 5 % after every five years.

The draft proposes to relax lease of government land for self-employment to ex-servicemen, war widows, BPL families, construction of residential houses by landless Himachalis and for rehabilitation of natural calamity sufferers, which includes the lease rates to be applied for them.

Lessee are to made bound to utilize the land allotted within 3 years, and instead of the earlier provisions to sub lease, it has been proposed that the lessee may get into agreement to manage, operate and maintain the leased property.