Surprising and painful, a cheap adult comedy, our very own American Pie, Grand Masti that released yesterday, has only one USP and it is to commoditize a woman’s body in every possible way, so as to evoke laughter.

It was ironic that on the very same day a special court handed out death sentences to the convicts held guilty by the trial judge in Delhi rape case (Nirbhaya case). Market savvy filmmakers, be it Ekta Kapoor in Kya Kool Hain Hum or Indra Kumar with Masti and Grand Masti, rank moolah higher than any sense of social responsibility. 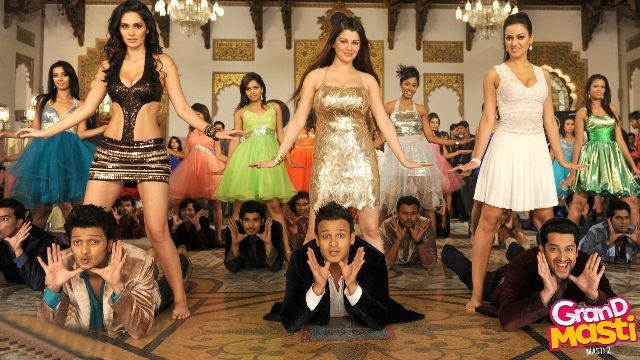 To top it, lifting punches and scenes from Mr. Bean series, American Pie, Naked Gun and Austin Powers, just to name a few, made it worse, but is that not what most of our modern and vulgar Bollywood comedies are all about. The movie’s sheer obscene content, easily surpasses all the wildest adult jokes that you ever heard from your best pal in college.

To be fair to the filmmaker, it is announced in advance that the content would be based on nonstop adult humor, so we are not here to review it for morality and decency. The assessment judges just the entertainment value of the flick, leaving aside rest for the viewers to decide.

The plot kicks in with three men, who had been college buddies, coming together to reignite their love starved lives by planning a bachelor reunion at their alma mate under the banner SLUTS.

Don’t read much into the banner for it’s actually is meant to be ‘Shree Lalchand University of Technology & Science’. This sets the tone of the kind of humor one would comes across in the movie.

The lecherous three, who have been unfairly alienated by their wives – Unnati (Karishma Tanna), the Saas-Bahu girl from the TV serial, Mamta (Sonali Kulkarni) and Tulsi (Manjari Fadnis), feverishly hope that the reunion would provide an opportunity to hound skirts & chase high heels to relive their fantasies once again.

As chance would have it, they meet the overtly kinky sex-obsessed teacher Rose (Maryam Zakaria), a bimbette Mary (Bruna Abdullah) and Marlow (Kainaat Arora). The drama unfolds with the funny escapades of the entire gang, which does not die down till the climax scene.

Amusingly, the names of three girls when spelt in concert, make your apprehend how low the script and dialogue writer could crouch down to push in some adult humor. The girls are casted for their supermodel physical attributes than acting skills.

But, there is a vindictive adversary in the name of Robert (Pradeep Rawat) who makes life hell for the male protagonists. The principal of the college, with his faithful crow, makes sure the guys don’t enjoy the fruit without receiving some ass bashing.

The movie churns out the choicest of expletives in the most thwarting way.

It feels heartrending to watch Hardik (watch out for the way the name has been played upon mischievously), enacted by enormously talented comedian Suresh Menon, making a real mockery of him, in embarrassing costumes.

The flick fails badly on the plot, consists of basket full of double meaning dialogues and predominantly centers on sexual pandemonium spiced up with cleavage shows.

The movie ends with the trio packed up in plasters on hospital beds shamefacedly vowing never to wander off into inviting corners of the city.

But, it feels miserable for the actors especially talented ones like Vivek who are forced to run in colorful Mickey Mouse undies right on the middle of the road,
so as to ensure flick’s success on the box office.

This is what B3 (Big-Bad-Bollywood) can do to you.

Musical scores by burnt out music directors Anand Raj Anand and Sanjeev Darshan were as insignificant as the work done by Censor Board of Film Certification.

To watch the movie, leave your pretensions back at home. Only then, the flick can jell up your mood.

But “Friends I have an idea’’ (frequent lines by Aftab, a character in the picture) – don’t ask your family to accompany you to the cinema hall, as it’s best to commit sins all alone.