Tripping back to the 90’s, a time reminiscent of India’s dark fiscal hours and much else, for the last few days is abuzz on Twitter and Facebook.

Gauging the current scenario – we are fallen back to the traditional Hindu rate of growth (latest GDP figures for the first quarter of the current financial year are 4.4%), Sanjay Dutt is back in jail, Madhuri and Sri Devi are (kind of) ruling the roost in Bollywood, Narayan Murthy is back heading Infosys, Nawaz Sharif is once again Prime minister of Pakistan and Jagmohan Dalmiya is again working as President of BCCI;  nothing has changed for the old days are back again.

Barring a sluggish growth rate of the country, everything else can be easily taken into stride especially ‘Dhak-Dhak’ girl’s home-coming.

Getting back to the main point now, the first quarter growth rate for this fiscal year has dropped down to 4.4%.

For an economist prime minister credited with unleashing the Indian economy that had become used to be growing at around 7%-9% consistently for most part of the last eight years, the Hindu growth rate chickens have come to roost, rather early.

While the economy meddles up, Reserve Bank of India (RBI) has been fence sitting for long, not that the government has been doing anything worthwhile in between.

In point of fact, it was all in the coming for long and we kept betting on the wrong horse, all these years.

Ruchir Sharma, head of equities for the Emerging economies at Morgan Stanley voiced the dangers of easy money emanating out of Quantitative Easing (QE)  program in the US and Japan long time back.

‘Breakout Nations’ by Ruchir clearly pointed that emerging economies mainly BRICS (excluding China) are just making merry on the basis of hot money from the US and their domestic policies have nothing to take credit about it.

Attending a session earlier in the year where Ruchir was a speaker, when the tech savvy AADHAR man Nandan Nilekani questioned him about what he thought about India’s constant economic growth trajectory, the economist put it bluntly, “it’s more to do with the QE and Manmohan Singh led government has nothing to do with it.”

He rightly believed that all major Emerging Markets (EM) would feel the pinch once the QE tapering starts. Most participants just shot down the spoilsport views expressed. 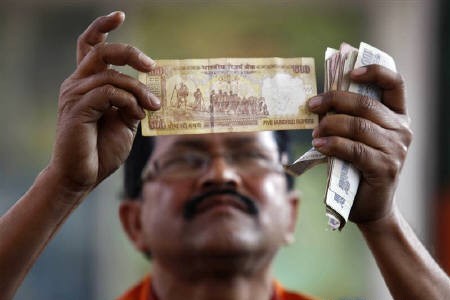 India is a consumption based economy with a poor infrastructure for exports, unlike China. Whatever exports we carry out are not enough to balance out the imports we make.

Despite having large reserves, the plight is that we have been forced to import large quantities of iron ore and coal. Though, we did fare well in IT related software exports, better than China, but manufacturing can’t be substituted by growth in services ever.

A poor monetary and fiscal policy, with a total failure of the UPA government to handle it all, has landed us on Mars with no oxygen mask.

The rupee is hovering around at 67-69 levels after having registered a record depreciation of almost 16% since the start of the year against the dollar.

We have been shouldering an unsustainable Current Account Deficit (CAD) of 4.8% of GDP for the last three years. Such a large CAD was able to getaway in the harsh world because of abundant liquidity in the global financial system.

During all these years when Foreign Institutional Investors (FIIs) were pumping in blind money in our equities and debt markets, we could have restructured our poor infrastructure and increased exports. But, sadly it wasn’t such.

The government was busy spending its time in all kinds of populist schemes. It has always wanted to drag us back into the Nehru’s socialist era where the spirit of entrepreneurship wants to make their lives resourceful through capitalist measures.

Interestingly, even in the ongoing Parliamentary session, the government was hell bent on passing the Food and Security Bill and Land Acquisition and Rehabilitation and Resettlement Bill.

The first one will surely hit badly on the already worsening fiscal deficit and the latter (which also has retrospective clause attached) will lead to escalation of land prices in the country further making acquisition of land difficult for industries, further slowing down any chances of increasing exports and growth.

Worst is not over

In contrast to China, our exports only contribute marginally to the GDP. However, the dynamics of consumption are changing as is obvious from the results of the fiscals first quarter.

The modest growth of 4.4% in the preceding quarter is way below last years decade low growth rate of 5%. Where services grew by 6.1%, industry contracted by 0.8% and agriculture & allied sector rose by 2.7%.

Additional fear arises because it was a rise of 9.4% in government spending on social, community and personal services that helped the economy grow to this level in the quarter.

With government unable to maintain such a spending spree in the second half of the year, the growth figures for the current quarter and the year ahead could drop further.

Indications are that the consumer sentiment in the country has been knocked down badly. The quarter’s data recorded lower numbers of 3.9% growth in the trade, hotel, transport and communication segment – one of the biggest contributors to the GDP and a key indicator of domestic consumption power.

With a low rise of about 1.6% in private consumption and fall of 1.18% for Gross Fixed Capital Formation (GFCF) in the first quarter (y-o-y) paints a gloomy picture altogether.

The sold out consumption story of India has taken a huge hit lately. Experts believe that had the government spending been lower in the last quarter, the GDP could have further contracted to a dismal 4%.

Future Is Not Rosy Either

With an attack on Syria, led by US and its trusted allies, brewing up, commodity prices are expected to rise again. This will spiral upward inflation again and India already is battling a double digit inflation figure.

We couldn’t make the best use of fall in commodity prices in the past months due to sudden fall in the rupee and with war clouds building up on the Syrian horizon; the currency could experience further depreciation making hyperinflation a high possibility.

Though India doesn’t import much crude from this region but a US-Syria war is bound to impact the entire Middle East. Brent Crude is already trading at $ 114/barrel.

Oil Marketing Companies (OMCs) hardly have an appetite to be weighed down more by under recoveries. Passing the buck to bulk and retail consumers, we are again likely to be hit by a steep price hike in fuel

One way out for India would be to approach the IMF for a bailout and if it has to, it would be fourth time in its history when the growing economy would stand thus humbled.

Raghuram Rajan will unveil his first monetary policy statement on 20th September. Let’s hope against the inevitable that our Diwali will have something special this time.