Shimla: The hills of Himachal Pradesh continued to experience moderate to heavy rains today and all the major rivers and their tributaries were in spate, officials said. There could be heavy to very heavy rainfall at some places in the state till tomorrow, the Met office warned. 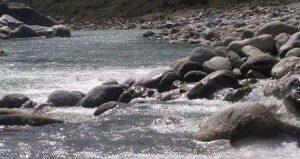 A government spokesperson said the Satluj, Beas and Yamuna rivers and their tributaries were again in spate in Kinnaur, Shimla, Kullu, Mandi, Bilaspur and Sirmaur districts.

These rivers enter Punjab and Haryana.

Authorities said excess water was discharged yesterday from the Pong dam, located 250 km from the state capital, as a precautionary measure.

The dam’s water level was at 1,375 feet Tuesday, an official of the Bhakra Beas Management Board said.

The dam meets the irrigation requirements of Punjab, Haryana and Rajasthan.