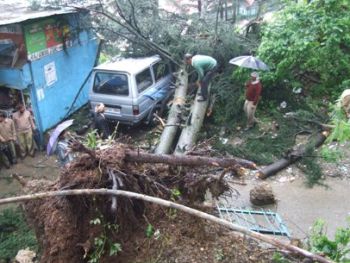 “In this calamity, my government has done its best to provide immediate succour to the affected regions and people,” Singh told the state assembly in a suo motu statement.

“Funds to the tune of Rs.129.24 crore were released to carry out restoration works,” he said.

A detailed memorandum of losses, the chief minister said seeking liberal financial support from the National Disaster Response Funds (NDRF) has been submitted and a central team for assessment of losses has already visited the state.

“The state has obtained from the government of India the first instalment of state disaster response fund of Rs.68 crore,” he said amidst pandemonium created by the opposition BJP in the house over its demand to allow a discussion on heavy losses caused by rains.

He said: “The state experienced an unprecedented heavy rainfall, which was 576 percent to 1,358 percent above normal during these three days (June 15-17). Kinnaur and Sirmaur were the worst affected districts. Kinnaur also received untimely snow during this period at several places.”

Since then, he said heavy rains have lashed various parts of the state almost on a daily basis.

According to Singh, 4,377 stretches of roads have been affected and the losses on this account have been assessed as Rs.1,221.45 crore.

The entire stretch of National Highway 22 from Wangtoo to Sumdho has been washed away at several places. This part of the highway is maintained by the Border Roads Organisation and has suffered a loss of about Rs.40 crore, the chief minister added.