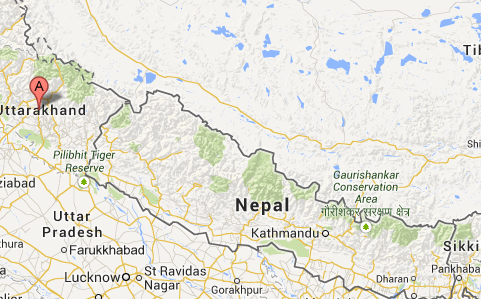 Dehra Dun: Terrorist Abdul Karim Tunda, who was arrested on Friday last from the Indo-Nepal border in Uttarakhand, may have used one of the over three dozen pedestrian routes used by the local villagers to sneak into the country before he was taken by the intelligence agencies.

In fact there are fears that these routes which are not manned by the security agencies are probably being used by anti-national forces not only for the entry and escape of terrorists, but even for smuggling in drugs, arms and even fake Indian currency.

It is by and large being believed by the intelligence and security agencies that the pedestrian paths that are used by the villagers on the fringes of the Indo-Nepal border from both sides, to move in and out. The villagers of both the sides are said to be related to each other and even marriages are often conducted amongst the residents of the villages.

According to reports, Uttarakhand shares an almost 250 kms border with its neighbor Nepal, which is by and large very porous.

The border is manned by personnel of the SSB and CISF and the Uttarakhand Police which has posts at certain points for routine checking.

Of the almost 40 pedestrian paths that one can use safely to cross in from one country to the other, there are only about seven or eight which are notified and there are police posts and posts of the para-military forces to keep a check on any anti-national activity.

In fact locals who have been using these pedestrian paths for decades also prefer not to inform the police or the intelligence and security agencies about their presence so that they can move about freely without any check or hindrance to both sides.

It is said that most of these paths have been made by the locals over the years across the Sharda and kali rivers which form the Indo-Nepal border in the Uttarakhand region. These have been made known to the terrorists and other anti-national elements over the year, by the villagers themselves, albeit at a price.

It may also be mentioned that no passport or visa is required while an Indian or Nepali citizen is traveling from India to Nepal or vice versa and as per a treaty between the two countries, there are 18 identification documents, of which any one can be used for crossing over. Obviously for those making false passports and visa, it is child’s play to procure one of these documents and even get into the country through the manned entry posts.

As the border is also open and does not have any barbed wire fencing or other barrier, the pedestrian paths provide safe passage to those wanting to enter the country illegally without any valid documents. The vigil of the Uttarakhand Police also needs much to be desired to detect such illegal entrants into this small mountain state, as they can easily merge with the local population and then move anywhere in India.

However, official sources maintained that there is regular patrolling along the border and it may not be that easy for ultras or others to sneak in, adding that they were well aware of the fact that it is an open border and as such more vigil and alert is needed.