Shimla: First state in India to ban plastics has not banished the offensive material responsible for littering scenic landscapes in the state for lack of a proper garbage disposal in the forested area of Sangati, a city suburb, has been turned into waste dump yard that is littered with polythene, plastic waste and other non-biodegradable material.

Not just a scar on the clean environment but the gathering garbage is also threatening to kill the lush cedar trees in the forest. Besides the mounting heaps of daily garbage dumped also poses a health hazard to the people living in the area.

The Sangati area comes under the Neri panchayat jurisdiction and there is no one to take care of the waste disposal and sanitation systems in these areas that are otherwise close to municipal limits.

Diwakar Sharma,a resident of the area says, “With there being no door to door garbage collection scheme like you have in the municipal limits, and there being no other alternate garbage disposal system, the residents just use the open space in the forest area to dump their garbage daily. An initiative to start a door to door garbage collection scheme did not work in our locality and it collapsed within two months.” 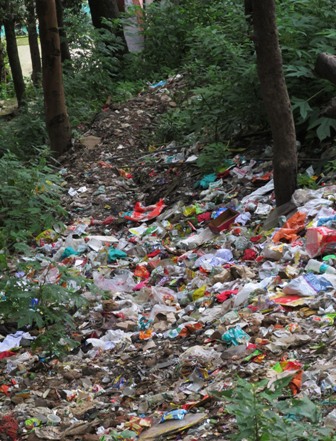 “Due to lack of adequate salary, the people engaged under the scheme refused to work, he added.

Nikhil Sharma, a student who walks past the locality on a daily basis says, “the stench of rotted garbage emanating from this otherwise green forest is so strong that it is becoming increasingly difficult to pass by this road, especially in these rainy days.”

Devinder Thakur, president of Sangati Panchayat lamented, “Though we did start a door to door garbage collection scheme but failed for lack of adequate staff”.

He said that the panchayat had applied to the Shimla municipal Corporation for providing them 8 employees.  Thakur hoped that the scheme would be reactivated by 1st September, once the municipality agreed to their proposal.

There are about 7000 people living in the Sangati locality, which is even lacking in such basis facilities like a proper road access, street lighting and sanitation services.

Despite the ban on all types of plastics, still large quantities of it are collected from the city and much of it is still dumped on slopes, drains and nullahs, which after accumulating over a long time even change the course of small streams.