Shimla: Admitting that illegal mining in Himachal Pradesh enjoyed political patronage, Chief Minister Virbhadra Singh today assured the state assembly that his government would soon clamp down on the mafia. 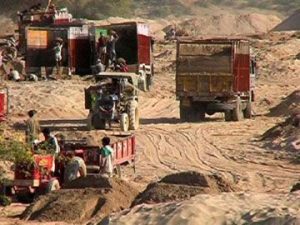 His assertions came about a fortnight after an attempt was made on the life of Yunus Khan, an officer of the Indian Administrative Service (IAS) and batchmate of the suspended Durga Shakti Nagpal of Uttar Pradesh, who had taken on the sand mining mafia in Gautam Budh Nagar district of her state.

“Mining in Punjab is banned and it is going on in a large scale in areas (of Himachal Pradesh) bordering Punjab,” the chief minister said, during the question hour.

“But we are going to tighten the noose around the mafia by framing tough laws which include the seizure of vehicles involved in mining and cancellation of licences,” the chief minister said.

BJP member Satpal Satti said since mining had been banned in Punjab, illegal mining of sand and gravel, used in construction, had increased in neighbouring Himachal Pradesh.

“The price of sand has recently increased four times,” he said.

The chief minister said the cabinet had approved a new mining policy with a provision to allow locals bonafide use of sand and gravel.

IAS officer Yunus Khan had a narrow escape when a tractor-trailer loaded with gravel tried to ram into his official vehicle while he was checking illegal quarrying in Nalagarh area, bordering Punjab, Aug 7.

Khan told that this was the third attempt on his life.

“Before this, the mafia tried to eliminate me twice, first in June-end and then in July,” he said.

Commenting on the enormity of the illicit trade, which mostly meets the requirements of neighbouring Punjab, Khan said: “The daily turnover of this trade in this area might be approximately Rs.1 crore.”