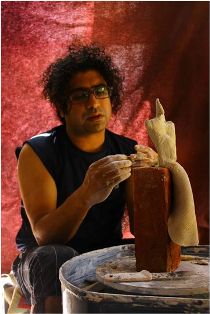 From MF Husain’s iconic symbol of horse as a medium of nature’s powerful expression on canvas to Picasso’s cubic influences on human distortions, budding multi-facet artist Neeraj Mittra imbibes a rare talent that he has already showcased in 40 odd exhibitions held in India, USA and UK.

Born into an artistic Gharana – where artistic traditions are passed on from generation to generation, Neeraj grew up to the expanse of wide green spaces in the countryside of Karnal, a north Indian city.

“Being young was about having music as the way of life with eternal classical touch, fantasizing the world through lenses of poetry and paint brush to vent out the inner creative tingling,” says the young master artist.

Not just paint and brush, the creativity impulse has led him to dabble in sculpture, music, cooking, fashion, poetry, compering and documentary film making.

The inborn raw talent has been nurtured as Neeraj went onto complete his masters from Delhi fine arts college in 1993.

In Husainian mold horses fascinate him. “Horses insinuate my inner self to the never say die spirit of freedom, divine power and magical rhythm,” he says.

About casting semi-realist human faces on canvas after canvas, he confides, “faces mirroring faces reveal the dual persona’s of an individual while the incomplete bodies bring out the imperfections in us. Life is so and for me it is all about celebrating such imperfections”

In the artistic arena, subjects may remain universal but it’s the sensitivity and treatment that matters, he says. The quirky use of colors to define emotions and state of being leave long and lasting impressions.

Attracting much attention in art circles, Neeraj has even held 14 solo exhibitions across different cities and has won numerous awards.