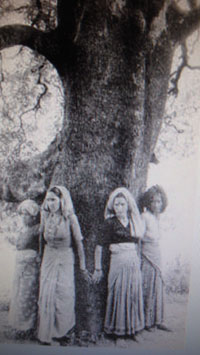 Dehra Dun : Though it may not exactly be the renowned ‘chipko’ movement of the 1970s, when women embraced the trees and refused to let go to prevent them from being felled by forest contractor’s labourers, but it has all the ingredients of becoming one.

Aware of the fact that roads are the lifeline in the hilly terrains of this small mountain state, yet the women folk of Dang village in Uttarkashi district, tied ‘raksha’ threads round the trunks of trees and vowed that will give their lives but protect the trees from being felled for the construction of the road that will connect Dang and Pokhri villages.

According to reports, the residents of Pokhri village had met the district magistrate, Uttarkashi on Tuesday, and submitted a memorandum to him demanding that the road which had been pending construction for the last seven years be made. However, the very next day the women folk went to the region and tied the ‘raksha’ threads on the trees and took a vow of protecting them.

The contention of the women folk is that the forest in which the trees are to be felled to make the road does not belong to the state forest department and on the contrary has been developed by them over the years, after nursing the plants and ensuring that they grow into healthy trees which provide them with fuel wood and fodder for their cattle.

In fact, in the memorandum that the women folk gave submitted to the DFO of the region, they have contended that the forest and the trees therein have been planted and nursed and nurtured by them and also that the court has in 2005 marked a certain number of trees that had to be felled for construction of the road, but the trees that were now marked to be cut is more than double that number.

With the women folk all out to prevent the trees from being felled for the road, the ‘chipko’ movement seems to be taking off yet again in the hills of Uttarakhand, where the mass felling of trees over the years for developmental projects, was one of the reasons for the June 16-17 floods that devastated the Kedarnath region.