Shimla: The deities are no more gracing the “land of the gods”, as Himachal Pradesh is known. They have been silently whisked away by antique smugglers.

The theft earlier this week of six ancient idols and antiques worth over Rs.1.50 crore from a three-century old Bondra ‘devta’ temple at Bachunch village near Rohru town, some 120 km from here, has once again put the spotlight on the treasures lying vulnerable in hundreds of temples and monasteries. 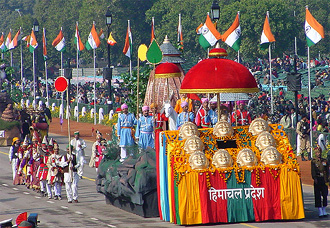 Police say it’s one of the biggest heists in a religious place in the recent past.

In the past 15 years, at least 100 thefts from temples have been reported, over 20 of them notable ones. The police suspect the involvement of Nepali migrants in connivance with foreign antique smugglers.

“It’s a serious issue. We will certainly soon implement some foolproof security arrangement in all the prominent temples and monasteries,” said Additional Director General of Police (Law and Order) Sanjay Kumar.

He said directions would be issued to the temple and monastery committees to put up iron grills where the idols and ornaments are kept.

“We will even convince them to install CCTV cameras and burglar alarms in the temple premises,” he added.

Despite a large number of thefts, the state has no policy on preserving antiques, an official said.

“No proper stocktaking or verification of antiques lying in various religious places has taken place for quite some time. No one knows as to what all is there in our inventory,” said an official of the state’s language, art and culture department, which looks after important temples of the state.

Antique idols and valuables worth Rs.33.83 lakh were stolen from temples between 2008 and 2011, of which stolen property worth Rs.5.49 lakh were recovered, then chief minister Prem Kumar Dhumal informed the assembly in a written reply April 5, 2011.

He admitted in the assembly that the government had not framed any separate policy to prevent thefts from temples.

Police officers say with the linking of roads in the interiors and opening of new areas for tourists, temples located there have become more vulnerable to theft.

“The gangs of smugglers recce the monasteries and temples located in the interiors in the guise of tourists in summer. In winter, they try to get away with the antiques when the temples are closed,” said a senior police officer, who didn’t wish to be identified.

Earlier instances of theft in temples include the stealing in September 2009 of seven antique idols, most of them made of silver, from the Keem temple near Rampur town in Shimla district, about 120 km from here.

Less than a week before this, five 17th century bronze idols were stolen from a temple in Nahan town.

In 2008, two ancient idols were stolen from the Shoolini temple in Solan town. In another incident the same year, ancient coins and silver artefacts went missing from the Suryavanshi temple in Kullu town.

In the majority of thefts, the police have failed to trace the stolen property.

But there are some fortunate ‘gods’ who have returned to their temples.

Take the case of two antique idols of the goddess Kunzum that were stolen in 2006 from the prominent temple in Kaza in Lahaul-Spiti district. The mastermind was arrested in Delhi in March 2008 and the stolen idols were seized.

Likewise, a rare five-foot bronze statue of Lord Vishnu, dating back to the eighth century, was stolen from the Hari Rai Temple in Chamba town May 6, 1971. It was recovered from a godown in Mumbai two months later and reinstalled in the temple July 7.

The hill state has over 2,000 temples and monasteries that are centuries old. Of these, 60 are under the Archaeological Survey of India (ASI) while 31 are under the state language, art and culture department.