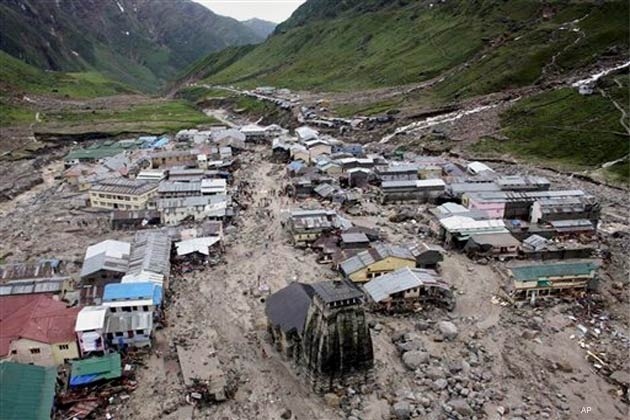 Dehra Dun : While the disaster that struck Uttarakhand over 20 days back has been described as a man-made disaster, to a natural calamity par compare, depending which side of the fence one is on, but both sides now agree that the unlimited number of pilgrims and tourists that were allowed to these places in the short span of six months, should and could have been avoided.

Actually what has been wrong with the planners of this small mountain state ever since it was carved out of Uttar Pradesh in Non 2000, is that they forgot to differentiate between piligrimage and tourism and clubbed both in the same bracket.

This gave them an opportunity to show that lakhs of tourists were visiting the various destinations of Uttarakhand, when actually the lakhs were pilgrims and a few thousand tourists.

Rather than adding and creating infrastructure to the various picturesque spots in this small mountain state and turning them into tourist destinations, which could have diversified the flow of large number of people away from the traditional char dham yatra route, the state government planners depended heavily on the yatra for tourism promotion also and in doing so erred heavily.

In fact, soon after the Vijay Bahuguna government took over, the tourism minister in his cabinet Amrita Rawat told media persons that adventure tourism would be promoted near the pilgrim shrines.

One wondered whether the ‘pujaris’ of the shrines would be given lessons in mountain climbing and other such activity, but showed that pilgrimage was being misinterpreted as tourism.

This is perhaps why the ills of tourism started plaguing the holy towns of the Uttarakhand. It is well known that though liquor and non-vegetarian food is officially banned in Haridwar or Rishikesh, but both of them are available in plenty.

There are hotels that serve non-vegetarian food and bootleggers make liquor available right at the Har-ki-Pairi the most revered ghat of the Ganga where the Ganga ‘aarti’ takes place, albeit at a price.

Not only this the malaise spread to the religious townships upstream also, as tourists started coming to the pilgrim towns.

One can get non-vegetarian dishes right at Badrinath and Kedarnath and also liquor.

The hotels that had sprung up at Kedarnath and at Badrinath cater to these to the tourists, while the pilgrims may be avoiding them. It is no surprise that the wrath of the Gods showed itself on the ill-fated day on June 16.

It is well known that when one goes as a tourist he goes to enjoy and will probably pack a case of beer and some whisky before starting the trip. A pilgrim on the other hand normally vows abstinence while on the pilgrimage and will only resort to such things on return. Which is why, pilgrimage and tourism was a bad mix in the char dham yatra in Uttarakhand.

It is generally believed that over 50 lakh people participate in the char dham yatra and it is believed that at any point of time during the peak season, there are about 1.5 lakh to two lakh pilgrims and tourists at the various halts on the yatra route.

This, despite the fact, that there is a bed capacity of less than 75,000 at these places.

The outcome is simple a large number of tourists or pilgrims sleep in their vehicles or in the verandahs and corridors wherever they get space. The defecate out in the open and generally there is hardly any infrastructure to cater to these crowds, which puts undue pressure on the limited space at the halting centres.

As the number of people on the yatra route has almost doubled in the last decade, a number of hotels, resorts, guest houses and ‘sarais’ and dharamshalas have come up to make a quick buck. Most of them have encroached upon the river banks and with no one to check the illegal construction, the once serene and green places have become concrete structures.

Worst there is no sewage treatment system at these places and the sewage is generally dumped into the rivers.

The logic of the Uttarakhand government that over the years, it did nothing, absolutely nothing to streamline the char dham yatra, which is the back bone of the economy in the upper reached of this small mountain state. While the number of yatris, on the Amarnath and Kailash Mansarovar yatras are limited, an unlimited number of yatris are allowed to Kedarnath, which also entails a 24-km trek. In fact not only registration, there should also be a medical check of the yatris going to Jedarnath.

But more importantly the government will have to demarcate between tourism and pilgrimage and advertise them so.

There is no dearth of tourism destinations in Uttarakhand, other than Nainital, Mussoorie and Corbett.

Only the necessary infrastructure needs to be created at these places which can be done on the PPP mode, whereas the pilgrims can enjoy the solace of the char dham yatra, minus the ills of tourism.

The line is for the state government to draw and wake up to the fact that it should create all the necessary infrastructure for the tourists at the large number of tourist destinations, so that they can enjoy the unparalleled beauty of Uttarakhand, but should tighten its hold on the char dham yatra route, so that the pilgrims can ring the bells of the shrines in peace.