Dehradun: The massive 15-day effort by the Indian Air Force (IAF) to evacuate stranded people in flood-ravaged Uttarakhand concluded today with the last pilgrim rescued from Badrinath. Officially, over 3,000 are still missing, but NGOs fear the figure could well be 10,000. 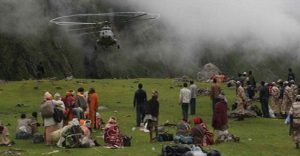 As authorities continued their efforts to account for the missing and reach out to far-flung areas with relief material, National Disaster Management Authority (NDMA) vice chairman Shashidhar Reddy said the official count of the missing was over 3,000 but the NGOs’ estimate of 10,000 missing “cannot be ignored”.

IAF spokesperson Priya Joshi said that the first phase of Operation Rahat concluded today with a group of 150 being taken out to safety from Badrinath.

“It was one of the biggest heli-lift evacuation of civilians in aviation history,” Joshi told.

They said that some labourers remain in the affected areas and would be taken out as soon as roads were restored.

Officials said authorities now faced a challenging task of cremating badly decomposed bodies in Kedarnath area. The situation was compounded by a variety of factors, including bad weather.

Uttarakhand Chief Minister Vijay Bahuguna today said that over 3,000 people were missing and the focus was to reach out to people stuck in far-flung regions of the state.

He said that 800 people would be evacuated from Pithoragarh in choppers.

Asked about a UN report putting the missing number at 11,000, Bahuguna said that the figure of 3,000 has been arrived at with help of various agencies.

He said that thousands remain missing and parts of Uttarakhand were cut off even a fortnight after the devastating floods.

The NMDA put the number of villages affected by the tragedy — one of the worst to hit India in recent times — at over 2,000. Incessant rains in Uttarakhand for over three days from June 14 triggered flashfloods and landslides, leading to hundreds of deaths.

Reddy admitted that supply of food to the affected villages — many of which have been washed away — posed a challenge as vast stretches of roads and bridges were not accessible. On today, 100 tonnes of rice were given to the Badrinath administration for distribution among the needy.

Reddy said choppers were being used to send supplies and eight teams of the NDRF were camping in the affected areas.

He said 1,025 people injured in the nature’s fury were being treated in hospitals. Of the 3,727 villages, 2,283 villages have been restored their power connectivity.

The Ministry of Women and Child Development has sent a two-member team to flood-hit Uttarakhand to asses the impact of the tragedy on children.

A three-member team of the ministry is stationed in Dehradun to coordinate with state health authorities to provide assistance.

An official statement said that India has sought financial and technical assistance from the multilateral development agencies, especially the World Bank and the Asian Development Bank (ADB), to help rebuild infrastructure in Uttarakhand.

IAF officials said eight to 10 helicopters would continue to be stationed in Uttarakhand. They said that the second phase of Operation Rahat will focus on relief and rehabilitation.

The officials said that under first phase of Operation Rahat, IAF conducted 2,240 sorties from June 18, evacuating 19,100 people and dropping 353,580 kg of relief material.