Beijing: Archaeologists have claimed to have discovered a rare bronze head with two faces and dating back to over 3,000 years, in a tomb complex in China’s Hubei province.

The sculpture featuring huge eyes, protruding cheekbones and horns has been unearthed from the site, Xinhua reported. 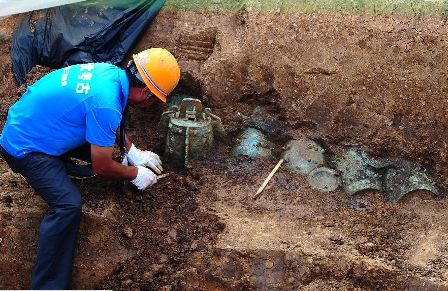 The graveyard consists of a cluster of tombs believed to be related to the nobles during the early Western Zhou Dynasty (1046-771 B.C.).

The sculpture was found positioned over the head of the owner of tomb M111, suggesting that it was of some significance at the time, said Zhang Changping, a history professor at Wuhan University.

“It is the first time that such a sculpture has been discovered from the Western Zhou Dynasty,” said archaeologist Li Boqian from Peking University, who suspected the item to be a patron god.

The shape and design of the sculpture are similar to masks uncovered from the Sanxingdui Ruins in China’s Sichuan province. But archaeologists said it resembles another two-faced sculpture found in 1989 in a Shang Dynasty (1600-1046 B.C.) tomb in Jiangxi province.

First discovered in 2011, the Yejiashan Graveyard was inscribed among China’s top 10 archaeological findings that year.

The latest excavation has found the dynasty’s first painted bronze and a tomb burying a set of 19 dings (cooking vessels) and 12 guis (food containers) that surpassed the burial norms for a king.