Lucknow: Breaking the ritualistic fast in the holy month of Ramadan would also mark a break with tradition in the one-time city of nawabs here. After the prayers, devout Muslims could eat pizzas, burgers, or even pancakes! 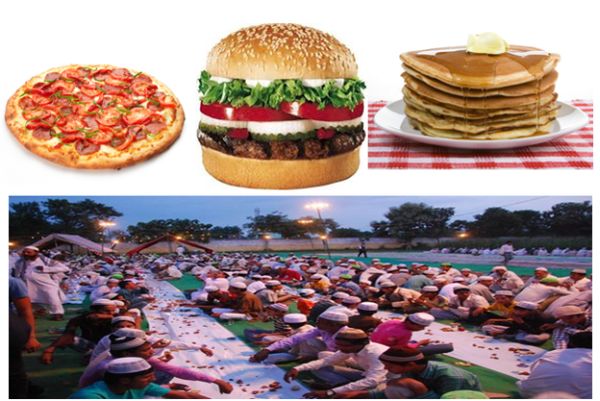 Ten mosques in the city – the capital of Uttar Pradesh with a substantial Muslim population 0 under the Hussainabad Trust, finding that city palates have changed and that fewer people now stay for their food at the mosque after the evening namaaz, and that large quantities of food go waste, are set to serve food that is more in tune with modern and younger tastes — pizzas, burgers, French fries, pancakes and even chowmien — to “rozedaars”, or people observing the fast.

A worried management has decided to “shape up the menu in such a way that fasting devotees stay back and relish the food when they break their fast in the evenings,” said an official, explaining that the Roza Aftaar, the meal that marks the breaking of the fast, had a new menu.

The matter of dwindling rozedaars staying back to break their fast at the mosques was brought to the notice of the management and the city administration by the general secretary of the erstwhile royal family of Avadh, Shikoh Azad.

Following this, the secretary of the Hussainabad Trust and the additional district magistrate (West) Hari Pratap Shahi, formed a “nigrani committee” which deliberated and decided on the menu for the Roza Aftari. This committee also included people from the civil defence. A budget of Rs.10 lakh has been sanctioned for the new-look Roza Aftaar this year, which is Rs.4 lakh above last year’s budget, Azad told.

Other than the pizza and burgers, the menu this time in these ten mosques would also included pancakes, spring rolls and boiled eggs.

Azad said that 600 poor people would be fed roti and ‘daal saalan’ each day in the holy month.

“The idea of the changed menu is not only to do away with wastage of food, but also offer the best to the people who are fasting in the name of Allah,” a management committee office bearer said.
Orders have been placed with prominent local eateries to supply in bulk pizzas and pancakes, while local ‘khaansaama’s (chefs) have been recruited for cooking the other delicacies.

The Muslim population in Lucknow is around 25 percent of the total 4.8 million people in the city.

Lucknow was established as capital city by the Shia nawabs of Awadh in the 18th century. The nawabs traced their ancestry to Persia (modern Iran).