Shimla: Still counting the losses from one of heaviest rains in history recorded in higher zones of Kinnaur in June, a people’s conclave has demanded that construction of dams and hydro projects be stopped fore with and the entire program be reviewed.

Speaking at the conclave held toady at Peo, the district headquarter of Kinnaur, RS Negi of Kinnaur Sangharsh Samiti (a NGO) said that the unprecedented rains followed by snowfall on 15-17 June not only claimed 25 human lives, but thousand of livestock perished.

More than 12,000 hectares of apple orchards, the mainstay of economy in the tribal lands, 12,600 hectares of agricultural land, over 1700 houses, including schools and more than 300 roads, mainly rural roads suffered extensive damage, claimed Negi. 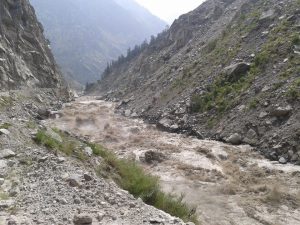 He lamented that because of the tragedy in Uttarakhand, the plight of Kinnaur people did not get proper attention by the government or in the media.

Numerous landslides and massive soil erosion has impacted vast areas which has been aggravated due to muck dumped in river bank by hydro projects and roads construction. Many houses and even villages have become unsafe to live.  Unfortunately the plight of more than seventy thousand people in Kinnaur has not attracted national
government and media attention, said Negi.

Ghuman Singh of Himalaya Niti Abhiyan (a NGO) demanded that trans-Himalaya be considered a very risk-prone zone because of the potential of earthquakes, floods and landslides and it needed to be governed by a sensitive and conducive model of development.

He demanded that the union and state government stop construction of dams and hydroprojects in Satluj basin.

Heavy vehicular inflow, entry of external population because of tourism, damming of River Satluj and construction of hydro-projects impacting local climate and were deliberated are causes for the erratic weather witnessed at the conclave.

Rainfall of 365 mm recorded in 48 hours, something which the cold arid desert zone does not experience in a year is an alarming sign for upper reaches of Satluj valley which comes under highly seismological active zone, sad RS Negi.

The unusual weather patterns in Kinnaur are an alarming sign of further catastrophe and it needed to be recognized that the current model of development with unscientific constructions leading to local climate change conditions was a man made phenomenon.

More than 300 participants attended the conclave, held at Bachat Bhawan, Peo organized by Him Lok Jagriti Manch. Other than RS Negi, Guman Singh, the gathering was also addressed by Nanak Singh Negi and Ramamurti Sreedhar from Minerals Mines and People (a NGO) organizations.