Aakash is a series of Android-based tablet computers promoted as a learning tool by the Human Resource Development ministry.

A new version of this tablet was announced Wednesday. Prof. Ashok Jhunjhunwala, the man behind the Aakash 4 specifications at Indian Institute of Technology – Madras, responds to criticism over its proposed specifications. 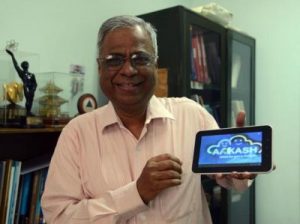 Q: Why have these specs for Aakash 4 changed so little from version 2?

A: The focus in Aakash 4 has been on quality, ensuring that multiple vendors can supply us, and that we can measure quality.

Q: Yes, but technology has changed. Yet even the processor spec has not been been updated to, say, dual-core!

A: The specs for the Aakash 4 CPU are based on performance, rather than single or dual core, or clock speed in MHz, or even the CPU type. Many performance and quality issues have been touched upon in the specs. The testing and acceptance criteria have also been defined.

Q: Why are basic features like cellular data and phone call capability being kept as optional extras?

A: The primary connectivity is envisaged as Wi-Fi. Secondary connectivity will be through USB, and any modem can be connected to it. Two USB ports are in the specs. The tablet is primarily for data connectivity. 2G is too slow for any significant educational use. 3G or 4G would become very expensive, but can be used through USB by those who can afford it. Bluetooth has also been added.

Q: But a dongle for a phone call? Does such a dongle even exist?

A: Yes, dongles can be used with USB. They exist.

Q: The procurement price, up to Aakash 2, was Rs.2263 excluding taxes. You had indicated this would be in the range of Rs.2,500 for the next round, but there are reports now of this going up to Rs.3,000, due to the rupee’s decline?

A: We expect the price to be around Rs.2,500 in volume and we expect multiple manufacturers to progressively manufacture in India and supply it.