Srinagar: The Indian Army chief, Gen. Bikram Singh, yesterday discussed the security situation with Jammu and Kashmir Chief Minister Omar Abdullah and assured him that measures would be taken to ensure that incidents like the Hyderpora guerrilla ambush and the killings of two youngsters in Bandipora district would not recur. 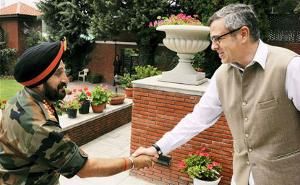 Eight soldiers were killed and 13 others injured in a guerrilla ambush in Hyderpora Bye-pass area of Srinagar on June 24, while two youngsters were killed in army firing in Markundal village of Bandipora in north Kashmir June 30.

The army chief also visited some forward areas and also some areas in the hinterland yesterday.

“While interacting with the officers and troops, he gave out his key result areas and stressed upon the secular and apolitical ethos of the Indian army. He complimented them for their outstanding vigilance, state of preparedness and high morale.

“The chief was appreciative of the initiatives under taken by northern command and in particular, the Chinar Corps which have led to sustaining the peaceful environment in the Valley.

“He also lauded the Chinar Corps, Jammu and Kashmir Police, CRPF and other security agencies for their synergized effort in smooth conduct of Shri Amarnathji Yatra as well as other operations,” a defence statement issued here said.

The statement added that the army chief interacted with the troops deployed in the forward areas of Baramulla and Kupwara sectors as well as the hinterland.

Gen. Singh has conveyed his greetings for the Muslim holy month of Ramadan and the Amarnath Yatra to the army personnel and the people of the Valley.

The army chief had called on Governor N.N. Vohra after his arrival here Monday.