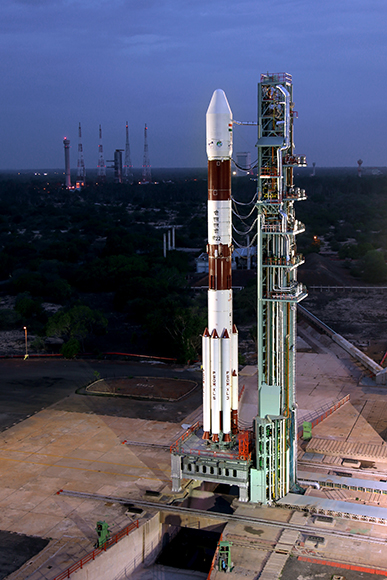 With the successful launch of the first of the seven satellites planned under the Indian Regional Navigation Satellite System (IRNSS), India took the first step in joining the select group of nations having such a system.

Indian Space Research Organisation (ISRO) chairman K. Radhakrishnan said that with the successful launch of the satellite, India had entered “a new era of space applications”.

“We have had late evening and early morning launches. But this is the first time ISRO is launching a rocket around midnight,” an ISRO official told IANS.

The expendable rocket had a single but important luggage, the 1,425 kg IRNSS-1A navigation satellite.

Blasting off from the first launch pad at the Satish Dhawan Space Centre here, around 80 km from Chennai, to the onlookers, the rocket looked like an inverted flare or torch with a long handle as it ascended towards the twinkling stars amidst the cheers of the gathered scientists and media persons.

ISRO scientists at new rocket mission control room were glued to their computer screens watching the rocket escaping the Earth’s gravitational pull. At around 20 minutes into the flight, PSLV-C22 spat out IRNSS-1A.

Immediately on the successfully ejection, scientists at the mission control centre were visibly relieved and started clapping happily.

“I am extremely happy we had another excellent flight of our PSLV vehicle,” Radhakrishnan said, adding it was the 23rd successful flight of PSLV and 4th of the XL variant, terming it an “extremely reliable vehicle”.

Announcing the precise injection of the satellite in its designated orbit, he said: “India has entered a new era of space applications.”

Soon after the ejection into the orbit the satellite’s solar panels were deployed.

The satellite control was taken over by the Mission Control Facility (MCF) at Karnataka’s Hassan. The MCF will manage the satellite’s orbit raising operations firing the on-board motors till it is placed in the circular geosynchronous orbit.

The IRNSS-1A satellite is intended to provide terrestrial, aerial and marine navigation services and help in disaster and fleet management.

The satellite with a life span of around 10 years is one of the seven satellites constituting the IRNSS space segment – a regional navigational system developed by India designed to provide accurate position information service to users within the country and up to 1,500 km from the nation’s boundary line, the ISRO said.

While ISRO is silent on the navigation system’s strategic application, it is clear that IRNSS will be used for defence purposes as well.

“All the seven satellites of the IRNSS are identical and the space agency will be rolling them out. Already the second one is getting ready for the year end or early 2014 launch,” the official said.

“Only when all the seven satellites are up in the space the whole system will come into play. The earlier we have the full system it is better for all. For instance by 2015, the first satellite – IRNSS-1A – will be nearly one-and-a-half years old and its remaining life span will be eight-and-a-half years,” he said.

He said once the regional navigation system is in place, India need not be dependent on others.

The IRNSS will provide two types of services — standard positioning service and restricted service. The former is provided to all users and the latter is an encrypted service for authorised users.

The IRNSS system comprises of two segments – the space and the ground. The space segment consists of seven satellites of which three will be in geostationary orbit and four in inclined geosynchronous orbit.

The satellite will go around the Earth at a height of about 36,000 km, ISRO said.

The ground segment consists of infrastructure for controlling, tracking and other facilities.

The ISRO had planned to launch IRNSS-1A last month. But it had to put it off after finding a problem in one of the electro-hydraulic control actuators in the second stage engine.

Following the Monday’s launch of the navigational satellite, the ISRO is planning to launch its communication satellite G-Sat14 using a heavier rocket – Geosynchronous Satellite Launch Vehicle – powered by a domestic cryogenic engine some time in August.

It will be followed by the mission to Mars later this year. The launch of one more remote sensing satellite is also being planned before the end of the year.

Two more PSLV missions are slated in the near future. The PSLV-C25 will be the silver jubilee mission. It will be followed by the launch of another PSLV rocket with foreign satellite SPOT-7.