Dehradun : The residents of Bhyundar and Pulna village, in the world renowned Valley of Flowers are today huddled in a guest house of the Garhwal Mandal Vikas Nigam (GMVN) leading the life of refugees, as their hearth and homes have been almost washed away in the June 16 floods that hit Uttarakhand.

For the over 460 persons belonging to about 102 families huddled in all 11 rooms of the guest house, life may not have been a bed of roses before the grim tragedy, but it was as colourful as the Valley itself, which was visited by thousands of tourists from June to October every year. 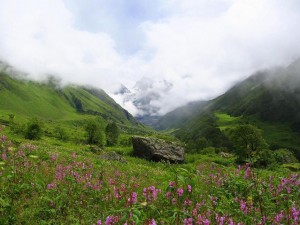 That they made enough from the tourists was evident from the fact that over the years, not a single person has migrated from the village in search of a job or greener pastures.

But come June 16-17 night and things have changed for the worst. The water level in Laxman Ganga rose alarmingly and washed away everything that came in the way of the gushing waters. Debris filled the houses, shops and other small establishments that the people of the village had set up after taking loans, to cater to the tourists. The tourist season provided them enough to sustain them for a year. But it is all gone now.

In fact such is the situation that the villagers do not know what is the condition of the Valley of Flowers, that was visited by thousands of tourists every year.

They are only hoping against hope the Valley of Flowers has not been reduced to a wasteland of debris and the plants of beautiful flowers that were a treat to the yes have not been lost for ever to the gushing waters. There is no one to tell them either, for no officer of the revenue or forest departments have visited the valley even  after about 45 days of the tragedy.

A spokesman of the forest department confirmed that nothing was known about the condition of the Valley of Flowers, as all trekking routes and bridges leading to it have been destroyed in the June 16-17 floods making it completely inaccessible. “How mush loss has been caused is not known and as the area has been continuously under clouds since the tragedy struck, satellite pictures are also not available to gauge the extent of devastation”, he added.

Asserting that should the complete valley have been devastated by the floods, it would be an irrepairable loss to the whole world, he said that in 2005, UNESCO had declared the Valley of Flowers, spread over 87 sq kms as world heritage. “Many rare species of plants not found anywhere else could be lost for ever and the exact position will be known only when the place become accessible once again”, he added.

The Valley of Flowers is a high-altitude Himalayan valley that has been acknowledged by renowned mountaineers and botanists in literature for over a century and in Hindu religion for much longer. The Valley of Flowers has many different flowers, taking on various shades of colours.

The Valley was declared a national park in 1982 and now it is a World Heritage Site. The locals believed that it was once inhabited by fairies and is home to many flowers like the Brahmakamal, the Blue Poppy and the Cobra Lily. It is a much sought after haunt for flower-lovers, botanists and trekkers.

The place had disappeared from the tourist map due to its inaccessibility, but in 1931, Frank S. Smythe, Eric Shipton and R.L. Holdsworth, all British mountaineers, lost their way while returning from a successful expedition to Mt.Kamet and happened to stumble upon the valley, which was full of flowers.

He was attracted to the beauty of the area and named it the “Valley of Flowers.” He later authored a book of the same name. In 1939, Miss Margaret Legge, a botanist deputed by the Royal Botanic Gardens Edinburgh, arrived at the valley for further studies. While she was traversing some rocky slopes to collect flowers, she slipped off and was lost. Her sister later visited the valley and erected a memorial near the spot.

The Valley of Flowers was established as a national park with effect from 6 November 1982. It is renowned for its meadows of endemic Alpine flowers spread over an area of about 80 sq kms. It is on the UNESCO World Network of Biosphere Reserves since 200. It is internationally important on account of its diverse alpine flora. The diversity of threatened species of medicinal plants here is higher than has been recorded in other Indian Himalayan protected areas.

Prof Chandra Prakash Kala, a botanist deputed by the Wildlife Institute of India, carried out a research study in the Valley for a decade beginning 1993 and made an inventory of 520 alpine plants, of which 498 are flowering plants.