Dehradun: The man and his 25-year-old son have seen death and destruction from close range. Even when people were dying all around them and structures were falling like twigs, they had supreme faith in the powers of the almighty, and today they are alive to tell the horror story of June 17 that wiped out the entire Kedarnath valley and turned many areas into a ghost town. 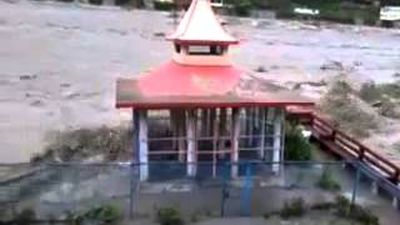 For 15 years Raj Kishore Trivedi had been running a small shop selling photographs of gods, posters and idols outside the revered Kedarnath shrine. But on June 17 in just five minutes, his entire world collapsed. But today, he is not worried about how his family of seven will survive as their only source of livelihood, the shop, no longer exists.

Trivedi is happy that he and his elder son Sandeep are alive, and for that he gives credit to only two – the army and god.

Lying in the state-run Doon Hospital emergency ward, Trivedi can’t move as he has fractured his left leg. His son helps him wash his matted and dirty hair.

His leg pains him immensely, but ask him about the fateful day, and he gathers enough courage to narrate the sequence of event that changed their lives – forever.

“It was 7 a.m. on June 17 that we heard a loud gurgling sound. I heard people shouting ‘run, run and save yourself’. Looking up at the commotion, I saw mud, boulders, stones coming at us with the torrent of water. The force of the water was so much that the roofs of many shops were swept away. Both of us then ran towards the temple. I had just entered the temple, when its massive gates were forced shut by the wind. It looked like god was waiting for us to enter.

“Soon water filled the temple. Only our neck was out of the water, while our entire body was submerged. The force of the water even shook the temple, and many things fell, including the donation box. The box was not so heavy, but as it fell with force, two-three people got trampled under it. They died. We were all very scared.

“In front of our eyes, we saw several people falling off and dying as they could not take standing submerged in the water for hours. There were around 600 people inside the temple at that time,” Trivedi told.

“The deluge happened in five minutes. But those five minutes have turned into an eternity.”

His eyes take on a faraway look as he recalls how he and some of the people thought of stepping out of the temple after the water began receding after several hours.

But the sight that greeted them stunned and shocked them.

“There were just dead bodies, in front of the temple and all along the market, just bodies. No shop was intact. The structures had fallen as if some invisible hand had touched it with great force. There was only mud, boulders and huge stones. The bustling market place had turned into a cremation ground,” he added.

The next nearly 40 hours wait for help was agonising for them. They got shelter at the only remaining structure of a guest house.

Like them, there were a few hundred who took shelter on the roof top of the guest house. As they had come with food and water they survived the wait for help.

The sight of a helicopter was like manna from heaven. And all of them cheered, he says, despite the fact that all they saw was bodies and destruction around.

Asked whom he credits for his life.

“God, He had something in mind for me. If he had not showered his blessings on my son and me, we would not be here, talking to you and sharing our story,” Trivedi told.

Asked what he thinks of the hundreds of rescue workers, including the army, his eyes fill up.

“They are next to god. They were like angels of mercy. There was no state authorities, just them. Both of us owe our lives to them. To god for considering us as his special children, and to the Indian Army who took us in the helicopter and brought us to safety. We are indebted forever to them,” Trivedi said.

His son Sandeep does not want to talk about their brush with death.

He just talks about what he saw — bodies and more bodies.

For both of them, the future looks bleak. They have lost everything in the flood, But the only hope is that they are alive, and maybe one day when Kedarnath opens again to pilgrims they will be able to set up shop once more and forget those horrible five minutes that altered their lives.