Srinagar: At least four people were killed and about two dozen injured in Jammu and Kashmir’s Ramban district yesterday when security forces opened fire on protesters, police said. The incident led to tension in Srinagar and adjoining Pulwama, Shopian and Anantnag districts with protesters taking to streets. 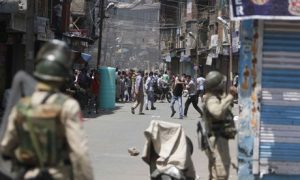 As a precautionary measure, the government has imposed curfew in Srinagar and other major towns of the Valley from today morning. Internet services were also suspended or slowed.

Condemning the incident as “unacceptable”, Chief Minister Omar Abdullah yesterday spoke to union Home Minister Sushilkumar Shinde, who ordered a probe and assured that any use of excessive force or irresponsible action will be dealt with strictly, an official statement issued here said.

In a separate development, a cardiologist was critically injured and two police guards killed when militants attacked them in Pampore town in Pulwama district of the Valley.

Four protesters were killed and over two dozen others were injured when guards fired at protesters storming a camp of the Border Security Force (BSF) in Shaida Gool village of Ramban district, 145 km from Srinagar, police said.

The people were protesting the alleged desecration of a mosque and beating up of an Imam by some BSF personnel.

Ten of the injured, five of them with critical bullet injuries, were airlifted by helicopters to hospitals in Jammu city, 180 km away, for specialized treatment, police said.

A BSF trooper was also injured in the incident. A BSF official told reporters in Jammu that a trooper had sustained a bullet injury after somebody from among the protesters fired at them after which the guards at the camp opened fire at the protesters in self-defence.

The state government has also ordered a magisterial enquiry while a high-level team which includes two ministers and the state police chief is camping at the spot. The district magistrate of Ramban has also been shifted out.

Condemning the incident, Abdullah said it was “unfortunate that in spite of costly lessons learnt in 2008 and 2010, some amongst us are determined to repeat past mistakes and use force against unarmed protesters”.

“It is highly unacceptable to shoot at unarmed protesters just because they were reportedly protesting manhandling of an Imam of their area,” he said.

Meanwhile, Jammu and Kashmir Liberation Front (JKLF) chairman Muhammad Yasin Malik was taken into preventive custody along with other supporters in Srinagar when they staged a protest in Maisuma area against the killings.

As the protesters marched towards city centre Lal Chowk, police intervened to break the protest arresting Malik and some other activists of the group.

Clashes between security forces and stone-pelting protesters also broke out in Pulwama and Shopian towns in south Kashmir. Police used batons and fired in the air to disperse the protesters.

Two government vehicles were torched by protesters in Ramban town.

Inspector General of Police, Kashmir, Abdul Gani Mir, told reporters that Jalal, a former director of the prestigious Sher-e-Kashmir Institute of Medical Sciences Soura (SKIMS) was moving on the street along with his security guards when three guerrillas suddenly appeared and fired indiscriminately at them.

The two security guards were killed on the spot while Mir was taken to hospital, Mir said.

Doctors at SKIMS where Jalal was brought and operated upon have said that his condition has stabilized although he lost one of his eyes because of the bullet injury.

Jalal had been provided armed guards by the state government. No guerrilla group has owned responsibility for the attack.