New Delhi: Nearly a month after a flash flood deposited nearly a 10-foot-high mound of debris around Kedarnath shrine in Uttarakhand, not much progress has been made in clearing it, an official said.

“Not much progress has been made in clearing the debris at the Kedarnath shrine,” M. Shashidhar Reddy, vice chairman of the National Disaster Management Authority (NDMA), told. 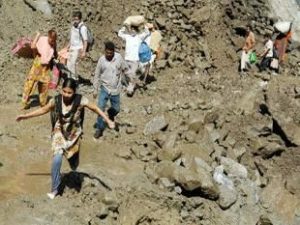 Reddy cited challenges like inclement weather which have been delaying the clearing of debris.

Thousands of people have been reported missing after torrential rains wrecked havoc in the hill state last month and authorities fear that bodies buried under the mound of debris in Kedarnath Valley may start decomposing, leading to an epidemic.

Kedarnath, one of the revered pilgrimage sites for Hindus, is situated at an altitude of 3,586 mt near the head of Mandakini river in Himalayas. It can be reached after a steep 14-km-long trek.

The incessant and intense rains that hit Uttarakhand over three days starting June 14 triggered flash floods and landslides, leading to hundreds of deaths.