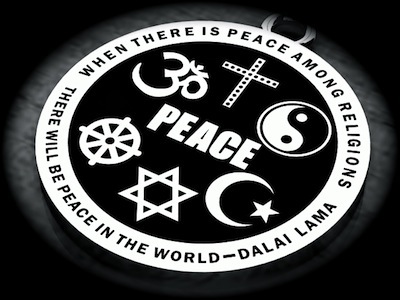 “People should embrace love and promote world peace through compassion to live in harmony,” the Dalai Lama said at his 78th birthday celebrations at Bylakuppe, about 250 km from here, where the largest Tibetan monastery was set up in the early 1960s.

Addressing about 40,000 Tibetan refugees who migrated from Tibet and relocated here over six decades ago, the Dalai Lama said his generation of people could only pray as it had no place to live after they were forced to quit their Himalayan abode following the Chinese invasion in 1959.

“The present day generation can create better conditions and build a world where everyone can live in harmony and in a spirit of co-existence,” the spiritual leader said in his 30-minute speech, which was heard in rapt attention.

Expressing gratitude to the people of Karnataka for allowing thousands of exiled Tibetans to settle in their state after they had to flee from their homeland, the Dalai Lama told his followers that they should serve their adopted country, which had given them a new life and a place to live with dignity and honour.

“You should not think of your and your family welfare alone but of your fellow beings and the country you are living and the whole world eventually,” the Nobel laureate told the gathering on the occasion.

Prayers, cultural dances and songs by thousands of Tibetans, including children, women and monks marked the occasion at the sprawling venue.

Chief Minister Siddaramaiah, seers and priests of other religious greeted the Dalai Lama on his birthday and participated in the interfaith meeting.

Wishing the Dalai Lama a long and healthy life, Siddaramaiah said the spiritual leader’s life was a saga of sacrifice.

“We are all fortunate to celebrate the Dalai Lama’s birthday as he is a symbol of love, brotherhood and compassion,” the chief minister said on the occasion.

Hailing the Dalai Lama as a towering personality in the spiritual world who was honoured with several awards worldwide, including the Nobel Peace Prize in 1989, Siddaramaiah said India and Tibet shared a unique historical and cultural relationship.

“The bond of friendship between Kannadigas and Tibetans dates backs to 1960.We have always treated them as our own people and sheltered them in their hour of crises,” Siddaramaiah recalled.

On the advice of India’s first prime minister Jawaharlal Nehru, then Mysore state chief minister S. Nijalingappa allotted 3,000 acres of land to resettle about 3,000 exiled Tibetans at the picturesque Bylakuppe hamlet in 1960.

With steady flow of Tibetan refugees overtime, an additional 2,300 acres of adjacent land was sanctioned in 1969 to accommodate them at Lugsan, the Tibetan name for Bylakuppe.

About 18,000 Tibetans, including 9,000 lamas (monks) and nuns reside in this largest resettlement camp in India that houses two monasteries, a few temples with Buddha and Tibetan deities, schools, hospitals, clinics, houses, hostels and shops.

To provide shelter for more refugees and make head room for future influx from Tibet and other parts of India/world, three more camps were set up in the state at Gurupura near Hunsur (2,500 acres), about 50km from Mysore, Kollagal (3,000 acres) in Chamarajanagar district on Karnataka-Tamil Nadu border and at Mundgod (4,000 acres) in the northern region of the state.

In all, Karnataka has the largest Tibetan population in the country. Of the total 120,000 refugees in India, about 40,000 reside in the three main camps of the state, while the rest are scattered across north India.