Patna: The Bihar government today opened a school for mentally challenged children in a house confiscated from former director general of police Narayan Mishra, convicted for amassing wealth through graft, an official said.

The school, named “Chaman” (garden) is the first such in Bihar. 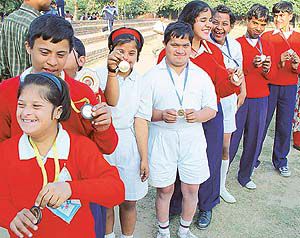 “It is a unique school to impart education to mentally challenged children and it opened in the confiscated house of a top police officer,” a district official said.

“More than 50 children will be enrolled in the school,” the official said. According to officials, the education imparted in the school will equip the children to lead as normal a life as possible, given their mental state.

Last year, the state government had taken a decision to open the school in the house confiscated from Mishra. The 5,937 sq ft house in Rukunpura locality of the state capital was transferred to the social welfare department.

A vigilance court in 2012 had ordered the confiscation of the property, finding Mishra guilty of amassing wealth far in excess of known sources of income.

It was the first time that a police officer who had been at the helm of the state’s police force was tried under the Bihar Special Court Act, 2009.

Mishra had challenged the vigilance court’s order in the Patna High Court, but his petition was rejected.

A vigilance case was lodged against Mishra in 2007 for amassing assets including property valued at Rs.1.40 crore in 1984.

Mishra was suspended by the government four years ago.

Till date, the Bihar government has confiscated the houses of an Indian Administrative Service (IAS) officer, Shiv Shankar Verma, and a treasury clerk, Girish Kumar.

Proceedings to confiscate properties of some more officials have been initiated.