Srinagar: Indian army chief, Gen. Bikram Singh yesterday reviewed the security situation in Jammu and Kashmir and the situation along the borders with Pakistan and China as he began his two-day visit to the state. 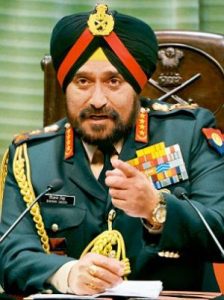 Gen. Singh chaired a security meeting at the 15 Corps headquarters here where he was briefed by Northern Command chief, Lt.Gen. Sanjiv Chachra, and the Corps Commander, Lt. Gen. Gurmeet, Singh on the measures taken to thwart infiltration attempts into the state from across the line of control (LOC) and the international border in the state, a defence spokesman said.

The army chief also discussed the latest developments along the borders with China following reports of recent incursions by the Chinese army into the Indian territory.

The address by the army chief to the officers of 15 Corps was also relayed to officers of the Jammu-based 16 Corps and Leh-based 14 Corps in the state through a video conference.

Later, the army chief called on the Governor N.N. Vohra at the Raj Bhawan and discussed the security situation, official sources here said.

During his stay here, Gen. Singh is scheduled to visit some forward positions along the LOC.