It is awfully painful to see the iconic Dharmendra, who has acted in several imperishable comedies during his heydays, being reduced to a mere parodic shadow of his old flamboyant utterly unaffected self in this cheerless travesty masquerading as a comedy. 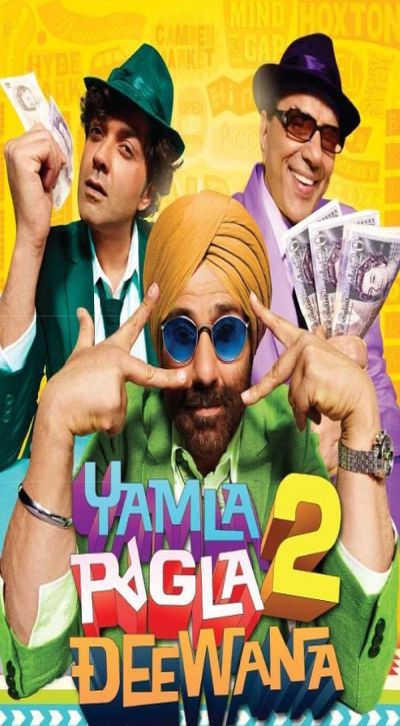 If you are one of those who thought the first segment of this farcical franchise was painful and laboured, then wait till you see what the sequel has in store. “Yamla Pagla Deewana” appears decidedly desirable in comparison with its sequel.

“Yamla Pagla Deewana 2” (YPD 2) is bigger in canvas, more ambitious in terms of cultural leaps made from Punjab to London. But finally what we are left looking at is a vehicle meant to bring the Deols together gone horribly haywire.

It would be an exercise in futility, if not impossibility, to describe the over-italicised plot or the caricatural characters. Suffice it to say that the farcical saga takes the three main characters forward on the same moral equilibrium as the first film. The father Dharmendra (God bless his affable screen persona) and the younger son Bobby are certifiable rogues. The turbaned elder son Sunny is upright and no-nonsense.

From this starting point, the film weaves in and out of a plodding mass of episodes, each one more strenuous and laboured than the previous. There isn’t one ‘Laugh Out Loud’ moment in the entire lengthy proceeding stretching into two hours 40 minutes of a tale that wastes the talents of one of Bollywood’s most celebrated film families.

Director Sangeeth Sivan believes in packing the proceedings with as many events and as much noise as possible. Everyone is seen running around all the time in search of laughter. In the process, talented actors like Anupam Kher, Annu Kapoor and Gulshan Grover are reduced to shadowy props.

So okay. This is meant to be a vehicle to celebrate the Deols’ collective stardom. But where is the spark and spirit to bolster the celebratory mood? Like a joke that horribly misses its punchline, YPD2 goes on and on elaborating on a joke that never had any laughter in the first place.

While it’s tragic to see Dharmendra and Sunny Deol trying so hard to milk the mirthless material for some laughter, it’s even more heartbreaking to find our cinema mistaking boisterous gags for genuine humour.

Oh yes, the two leading ladies are easy on the eyes. Some relief to offset the ceaseless aural assault. Sheer torture.