Dehradun/Haridwar: There was still no clarity over the number of deaths in the flood-ravaged Uttarakhand, with a state minister today not ruling out an “estimate” of 10,000-plus and Chief Minister Vijay Bahuguna putting the number of missing people at 3,000. 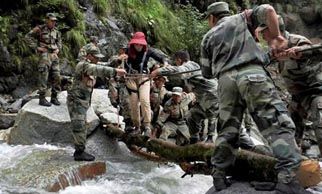 “He (Kunjwal) has given an estimated figure. At the moment, it is an estimate. It can go down, or it could go up. It is too early to give the exact number of deaths in the tragedy that has completely devastated the state,” Negi told.

The estimates, he said, were based on what evacuated people recounted to the rescue teams and to government officials.

Bahuguna, meanwhile, put the number of people missing in the flash floods at 3,000.

“After taking into consideration all the missing person reports lodged in this state and elsewhere, I have been told that the number of those missing is around 3,000,” Bahuguna said.

The chief minister said that kin of all missing people should report to the authorities, so that compensation can be given to them on the basis of an affidavit.

The incessant and intense rains that hit the hill state over three days from June 14 triggered flash floods and landslides, leading to hundreds of deaths and resulting in hundreds more going missing.

Though over 100,000 people have been evacuated so far, hundreds were still stranded.

While around 300-400 people are still stranded in Badrinath area and are waiting to be rescued, hundreds of porters and over 2,000 ponies are still untraceable.

NGOs claimed that some of them have been swept away by the flood waters or have been stranded and needed immediate evacuation or they could die of starvation.

With many bodies still buried under 5-10 feet high mounds of debris in the Kedarnath Valley area, the threat of an epidemic due to decaying corpses loomed large.

“Our first priority is to dig out the bodies. The second is to restore the entire route of the Kedarnath Valley. The third is to see that there is no outbreak of epidemic. We are monitoring the situation. So far, there is no fear,” Health Minister Negi said.

To hasten the process, the state government has sought earth-excavating machines from the central government. It has also sought 100 tonnes of bleaching powder to help dispose of the carcasses of animals killed.

Kedarnath, one of the revered pilgrimage sites for millions of Hindus, is situated at an altitude of 3,586 metres in the lap of the majestic mountain peaks and near the head of the Mandakini river. It can be reached after a steep 14-km-long trek.

Meanwhile, Madhya Pradesh Chief Minister Shivraj Singh Chouhan demanded the central government should declare a national environment policy to stop illegal construction and prevent a disaster like the one that devastated Uttarakhand.

He also asked for the Uttarakhand flash floods to be declared a national calamity.

“When you tamper with nature, then nature will unleash its fury on you,” Chouhan, who had come to Haridwar to meet evacuated people from his state, told.

Talking of the mushrooming of several buildings near rivers in Uttarakhand, he said: “Illegal construction and corruption go hand in hand.”