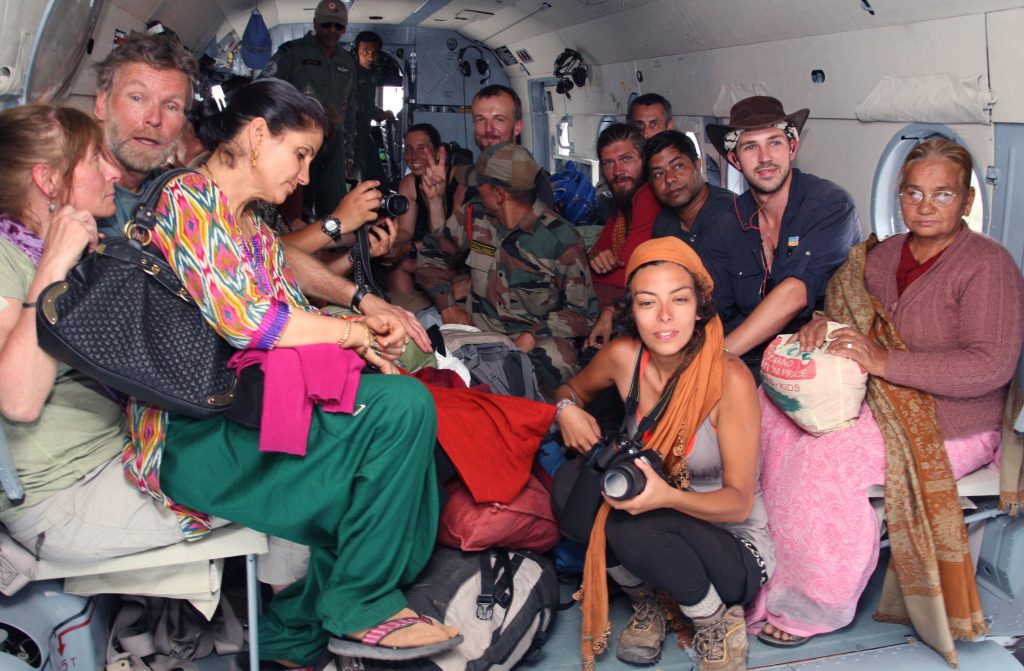 Dehradun:  Ignoring their personal safety, braving fuel supply constraints and tackling the elements, personnel of India’s uniformed forces – some of whom have summited Mount Everest – have been racing against time to save lives in devastation-hit Uttarakhand, driven by a sense of purpose and motivated by the hope in the eyes of the hapless survivors.

All this has seen some 70,000 people being rescued till Saturday evening but 20,000 are still missing. The official toll in the Himalyan tsunami that has ravaged large parts of the state was 557 till Saturday but is likely to go up as full scale of tragedy unfolds.

Personnel of the Indian Army, the Indian Air Force (IAF), ITBP, Border Roads Organisation (BRO) and NDRF have been toiling in the Badrinath and Kedarnath regions and some other upper reaches of the mountainous state to rescue thousands of pilgrims stranded due to flash floods that have hit the area.

The IAF has put in place an ingenious air fuel bridge, the Indo-Tibetan Border Police (ITBP) has deployed Everest summiteers and the National Disaster Response Force (NDRF) is planning to use unmanned aerial vehicles to look for survivors and victims.

Officials from various agencies said they were facing a multitude of challenges in the rescue work in the hilly state but finding a way to deal with it.

An IAF officer said pilots were carrying out rescue missions in conditions made difficult by treacherous hilly terrain and inclement weather.

“There are strict rules about flying hours of pilots but we are not going very strictly by the rule book. We want to maximize the relief effort,” an IAF officer said.

Till Saturday afternoon, the IAF had flown 768 sorties under its “Operation Rahat.”

The officer said that ray of hope among survivors was a factor motivating them in their sustained effort.

Another officer the IAF had resorted to “a unique but daring innovation” to meet the requirement of aviation fuel for the uninterrupted flight of helicopters.

Despite inclement weather, a recently-inducted C-130J Super Hercules aircraft landed at Dharasu, 155 km from state capital Dehradun, which has a 1,300-meter landing ground, Saturday. “It de-fueled 8000 litres of fuel into an empty bowser which had earlier been airlifted by a Mi 26 helicopter. With the availability of additional fuel at Dharasu, rescue operations have picked up pace,” IAF spokesman Squardon Leader Priya Joshi said.

She said air operations were restricted due to non-avialability of aviation fuel. Another C-130J aircraft later carried more fuel to Dharasu.

The Indo-Tibetan Border Police has pressed members of its team, which had conquered Mount Everest, into the relief effort.

“We have a special team that has scaled Mt Everest. They also have special equipment. They are engaged in the rescue efforts,” ITBP chief Ajay Chadha told IANS.

Another ITBP officer said that personnel who were on “rest period” after their duty on the border with Chinavhave also been pressed into service for providing succour to the people.

“Personnel who have been posted in Uttarakhand are more familiar with the terrain,” he said.

The officer said ITBP men had carried out rescue work at heights between 8,000 and 10,000 feet where people sometimes find it difficult to breathe.

“There were pilgrims who had gone sick apparently due to lack of food. Our troopers have carried them on their backs risking their own health,” the officer said.

An officer of the Border Roads Organisation said that their work was hampered because of innumerable landslides as some of their machines got trapped.

He also said there were problems in carrying fuel for these machines.

He said BRO was using porters to carry fuel in cans in areas where it was still not possible to reach by road.

The army has pressed troops skilled in mountain rescue operations in the relief effort. It has prepared a helipad at Jungle Chatti to facilitate evacuation from one of the most dangerous and inaccessible areas of the Kedar valley. The army has also constructed two helipads at Gaurikunj.

NDRF inspector general Sandeep Rai Rathore said they had rescued people from inhospitable terrain where there was no footpath.

“We winched people into helicopters,” he said.

Rathore said they would use an UAV to look for survivors and victims in areas that were difficult to reach.

Food packets and medicines have also been dropped in the affected areas.

The state government has also stepped up its relief effort. Help is also being rendered by other government and non-government agencies.