Dehradun: The recovery of some tiger baiting apparatus in the Gohri range of the Rajai National Park has sent panic signals amongst the wild life and forest department authorities here, which is already reeling under the impact of a large number of tiger deaths in the two national parks of Uttarakhand, which have been taken note of by even the central authorities. 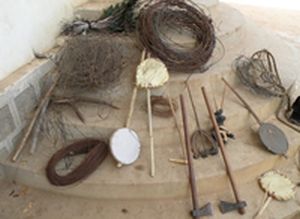 Though it is yet to be ascertained whether the apparatus was set by the poachers, or villagers in the immediate vicinity who are on a tiger killing spree, because the felines are making prey of their cattle, but it has certainly put up the forest staff on their feet. Instructions have been given to the filed staff to spruce up their combing operations and be more alert.

Even as efforts are being made to locate who could be the brain behind the baiting apparatus that was found in the Park area, it has been decided to quiz the van gujjars to know if they had seen any movement of suspicious elements within the forest areas. Night vigil in the Park areas is also being strengthened following the recovery.

The matter becomes serious as in the six months of this year as many as eight carcasses of tigers and tigresses were found in the Park areas and their immediate landscape, which had sent the forest authorities here in a tizzy. The main reason for this was the fact that in most of these cases the felines had been poisoned to death and as their skin and organs were in tact, it did not appear to be the handiwork of poachers, who normally do not leave these behind.

Meanwhile, a section of the wild life lovers here feel that the forest department should do away with the van gujjars who have made these forests, including the Park areas their homes and are literally running dairy farms at government cost. Though what is not irking them is that the van gujjars are using the forests for their personal ends and selling the milk and milk produce at high prices, but the fact that they are sharing their knowledge of animal movement, particularly tigers with the poachers and villagers.

They have also taken the stand that the forests are being badly denuded by the van gujjars, as their large cattle strength grazes the fodder on the ground and the men folk also lop the branches of the trees for feed for their cattle. This is causing fodder problems for the herbivore strength of the forests, on which the tigers prey.